South Sudan's government has denied it committed atrocities against civilians as alleged by Human Rights Watch. 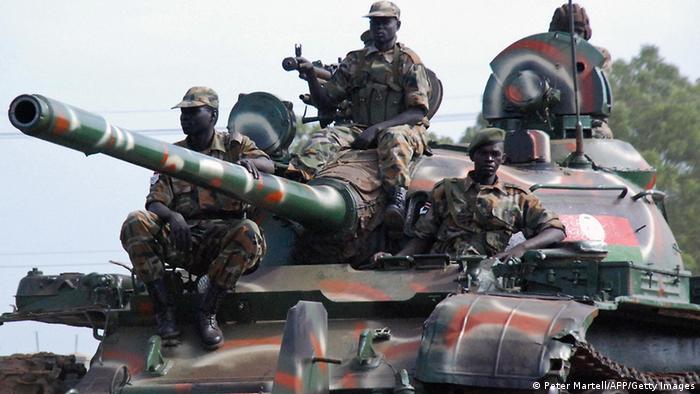 The rights group Human Rights Watch (HRW) said in a report that the South Sudanese army and allied fighters carried out scores of killings, rapes, and widespread burning and pillage of civilian property in a military offensive in Unity State in April and June. But in an interview with DW, South Sudan's government spokesman Ateny Wek Ateny described the accusations as baseless and said his government would publish a counter report.

DW: What can you say about the accusations by Human Rights Watch?

Ateny Wek Ateny: In actual fact the report was inconclusive. It was based on the emotions of a few individuals who were actually interviewed by such organizations. So, as government we categorically reject these these accusations of human rights abuse. We are determined and serious on the issue of maintaining and upholding human rights in South Sudan.

But the report says that HRW interviewed at least up to 100 people and one of the interviewees said they were hunted like cows. That's a very grave accusation, isn't it?

That is not true. What happened actually is that the communities in South Sudan are so polarized to the extent that if a foreigner comes to South Sudan and tries to talk to certain communities, he will be getting something that is inconclusive unless one looks at things in a better way. Making research or a survey by talking to people who said they are eye witness in South Sudan is not like talking to British or American citizens on the street. The country is polarized and is in a crisis. If you go to Unity State, depending in which part you are, you will get a different story.

But does the SPLA use fear and violence as a means of establishing control in Unity State?

No, the SPLA wasn't fighting with civilians but with rebels. It is the rebels who attacked the government positions and when the government responded to that aggression, of course some civilians may have been hit by stray bullets. Our bullets are not different from the bullets of the American army or the bullets of any other country where civilians are caught in cross fire. We are a national army and we don't intend to harm our own civilians. We are the ones protecting the civilians more than the rebels.

Most of the accusations apply to a militia group which the SPLA encourages and fights along with.

We don't have a militia group, we are operating as a national army. It is those who always put themselves on the side of trying to evaluate others who are the ones calling us militias because we might not be meeting their standards of thinking. But for us we are a national army, so bringing in a militia that is non existent is an insult.

So you disagree with the suggestion that the SPLA fights alongside civilians who are not members of the army?

There is nothing of that kind. We can't rely on somebody who is not trained. It can backfire. If you rely on somebody who is not trained, like Riek Machar was using the White Army, he suffered a lot of casualties - because you would be seeing them armed but they had not been trained to fight. As government we cannot make the same mistake. We don't have any problems, we have money and the economy is in our hands. We can call for recruitment and mature people can go there to fight . If they meet the criteria they will be recruited into the army, we cannot have militia.

So is your government going to react to this latest HRW report?

Of course, yes, the report is baseless.

Will you publish a counter report?

Ateny Wek Ateny is the spokesman for the South Sudan government

South Sudan is marking its fourth anniversary of independence, but the civil war is threatening to reverse progress made since the birth of the young nation. Lofty speeches would be out of place, writes Daniel Pelz. (09.07.2015)

South Sudan marks its fourth year of independence amid an ongoing civil war. But while warring political factions continue to fight, the people of Kuron village are trying to set their differences aside. (08.07.2015)

Following claims of serious rights abuses in South Sudan, the UN is sending in a team of monitors to investigate. Sanctions have been imposed on six military leaders from both sides of the conflict. (02.07.2015)