UNICEF has said the children are the first of a group of 700 due to be freed in the coming weeks. Even after the release, thousands of children are forced to carry guns and fight in the conflict-torn country. 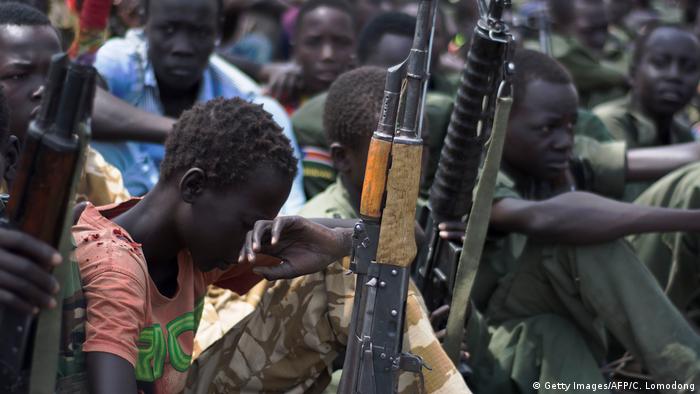 Armed groups in South Sudan's region of Yambio have released more than 300 child soldiers on Wednesday under a UN-backed program to disarm and reintegrate the children into society.

The children were formally disarmed and provided with civilian clothes during a UN-organized event. They will later undergo medical screening and counseling.

"Not all children are forcibly recruited. Many joined armed groups because they feel they had no other option," said UNICEF's South Sudan representative Mahimbo Mdoe.

UNICEF estimated as many as 19,000 children have been forcibly recruited as soldiers in South Sudan since 2013, when the country plunged into civil war just two years after gaining independence from Sudan.

The conflict erupted whenPresident Salva Kiir accused his former deputy and political rival Riek Machar of planning a coup. The conflict has resulted in the deaths of hundreds of thousands of people and has displaced more than 4 million people.

They should be playing, not carrying guns

Of the 311 child soldiers released on Wednesday, 87 are girls, the United Nations Mission in South Sudan (UNMISS) said.

"This is the first time so many young women have been involved in a release like this in South Sudan," said David Shearer, the UN's secretary-general's special representative and head of UNMISS.

"They will have endured suffering, including sexual abuse," Shearer said in a statement. "It is vital that they receive the support they need to rejoin their communities and that they are welcomed home by family and friends without any sense of stigma."

The integration program in Yambio, which is located in the south of the country, aims to help 700 child soldiers — the vast majority of them from Kiir's force — return to normal life.

UN agencies are also negotiating for the release of child soldiers in other parts of the country, particularly in the east and north.

"Children should not be carrying guns and killing each other," Shearer said. "They should be playing, learning, having fun with friends, protected and cherished by the adults around them."

UNICEF says it has negotiated the largest single release of child soldiers in South Sudan since 2015. Once reunited with family they receive three months of food aid and livestock. (26.10.2016)