A North Korean missile "blew up almost immediately" during a test launch, the US military has said. The failed launch comes a day after the North held a massive parade displaying apparently new missiles. 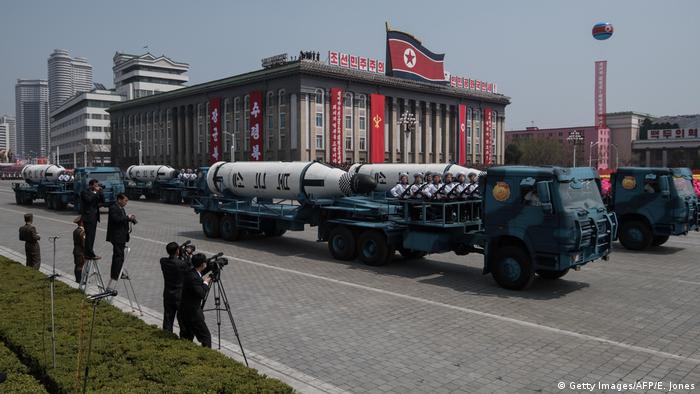 North Korea attempted to launch a missile on Sunday from a city on its eastern coast, but the launch is believed to have failed, South Korea's defense ministry said.

"North Korea attempted to test an unidentified type of missile from Sinpo area in the South Hamkyong Province this morning, but we suspect the launch has failed," South Korea's Office of the Joint Chiefs of Staff said in a statement. The office said it was analyzing the launch for further details.

The US Pacific Command said the launch took place at 11:21 a.m. Hawaii time (2121 UTC) on Saturday and that the missile exploded upon launch.

"The missile blew up almost immediately," said David Benham, a spokesman with the US Pacific Command. "The type of missile is still being assessed."

The failed launch comes a day after North Korea displayed nearly 60 missiles at a large military parade to mark the birthday of the country's founder, Kim Il Sung. One of the missiles showcased is believed to be a new intercontinental ballistic missile.

"North Korea showing a variety of offensive missiles at yesterday's military parade and daring to fire a ballistic missile today is a show of force that threatens the whole world," South Korea's Foreign Ministry said in a statement.

The latest missile test also comes as US Vice President Mike Pence is due to arrive in Seoul on Sunday, as part of a 10-day tour in Asia. The vice president's aides said Pence had been briefed about the failed launch and that he was in contact with US President Donald Trump. Pence's tour is aimed in part at reassuring allies in the face of rising tensions over North Korea's weapons programs.

President Trump and his military team were aware of North Korea's missile launch, US Defense Secretary Jim Mattis said in a statement. He added that Trump had no further comment on the matter.

Tensions between the United States and North Korea worsened in recent days, with Trump vowing to take a tough stance against the North and threatening unilateral action if China fails to help curb Pyongyang's nuclear program.

Trump also ordered a US navy strike group, headed by a nuclear-powered aircraft carrier, to head to the region as a show of force. The North, in turn, warned of a nuclear strike against the US if it is provoked.

Intelligence officials have warned that the North could achieve the ability to strike the mainland United States in two years.

The UN Security Council has imposed six sets of sanctions against Pyongyang since its first nuclear test in 2006. However, none of the sanctions have deterred the North's pursuit of weapons that it insists are for defense.