The US and South Korea have used the Korean War's 70th anniversary to reaffirm their alliance while pushing for a diplomatic solution on getting the North to give up its nuclear arsenal. 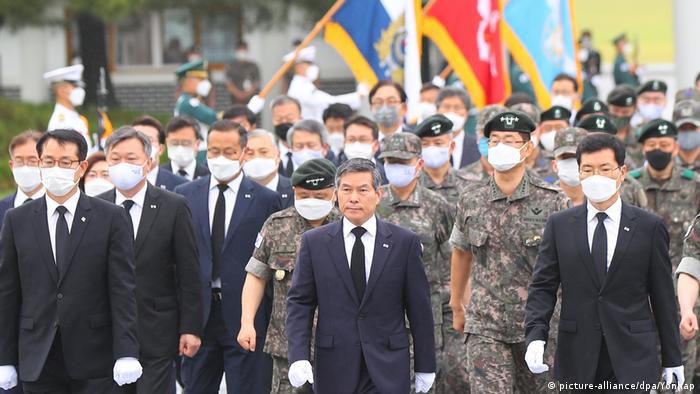 South and North Korea commemorated the 70th anniversary of the Korean War on Thursday, amid fresh tension between the two countries over denuclearizing the North and the South's military alliance with the US.

US Secretary of Defense Mark Esper and his South Korean counterpart, Jeong Kyeong-doo, reaffirmed their commitment to defending the "hard fought peace" between the two Koreas and preserving stability in northeast Asia.

"On this day in 1950, the US-ROK military alliance was born of necessity and forged in blood," read a joint statement, which also paid tribute to the "sacrifice, bravery, and legacy of those who laid down their lives in defense of a free, democratic, and prosperous South."

The statement also urged North Korea to follow disarmament pledges it made during summits with the US, and said the allies will keep advocating for a diplomatic solution on achieving the "complete denuclearization" of North Korea.

Jeong and other South Korean military leaders visited a national cemetery in Seoul, where about 130,000 war dead, mostly South Korean soldiers, are buried or honored.

No peace treaty in sight

A group of South Korean veterans marked the anniversary by gathering near the Demilitarized Zone dividing the peninsula and releasing white doves as a symbol of their hope for a final peace settlement.

"It is our misfortune that the South and North had to live for nearly 70 years in confrontation because of the war," a veteran said.

On June 25, 1950, Communist North Korea invaded US-supported South, sparking a war that killed millions. Fighting ended in 1953 with an armistice, rather than a peace treaty, meaning the two sides are technically still at war. The peninsula was spilt in two by a demilitarized zone at the 38th parallel.

Scant hope of a peace treaty surfaced during a diplomatic détente in 2018, starting with improved north-south ties and building towards a summit between US President Donald Trump and North Korean leader Kim Jong Un, brokered by Seoul. However, there has been little progress on getting Pyongyang to give up its arsenal, as the North accuses the South and its US allies of maintaining a hostile military posture.

North Korea has a different history of the Korean War, which it calls the "Victorious Fatherland Liberation War." It also claims it was attacked first and launched an assault in response.

The ruling party's newspaper Rodong Sinmun ran 10 stories on the war on Thursday, with one article saying the US "invasion turned the entire country into ashes."

"A ceasefire is not peace," it said. "The enemy is aiming for the moment that we forget about June 25 and lower our guard."