In reaction to North Korea's nuclear test, South Korea has resumed broadcasts of anti-Pyongyang propaganda across the border. The last use of loudspeakers triggered a military crisis between the two Koreas. 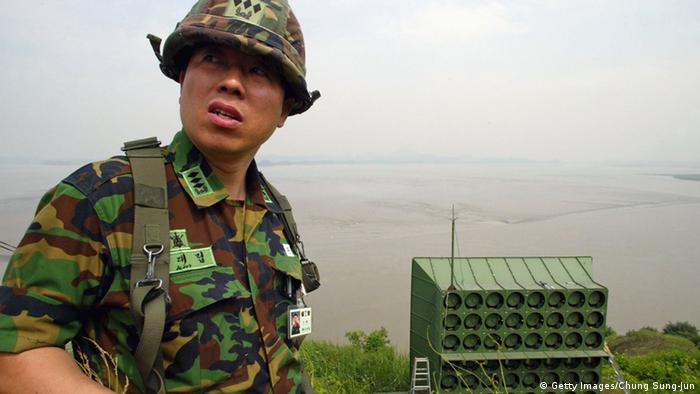 The broadcasts began at midday local time (0300 UTC) Friday, the same day which is believed to be the birthday of North Korean leader Kim Jong Un.

Included in the high-decibel propaganda is a mix of everything from K-pop and weather forecasts to snippets of news and critiques of the North Korean regime.

North Korea, which is extremely sensitive to any criticism of Kim, considers the broadcasts an act of psychological warfare. The tactic dates back to the 1950-53 Korean War.

When South Korea last blasted propaganda over the border for two weeks last August, the two Koreas exchanged artillery fire. In a bid to defuse tensions, they struck a deal that saw the South cut the music and propaganda. Part of the deal stipulated the loudspeakers would remain silent "unless an abnormal case occurs."

In light of Pyongyang's alleged nuclear test on Wednesday, North Korea has presumably over-stepped the mark on the South's scale of "abnormality." The test, allegedly of a hydrogen bomb, was met with international outrage.

In a statement on Thursday, the White House said both the US and Japan deemed North Korea's actions to be "yet another violation of its obligations and commitments under international law."

The South Korean Defense Ministry also said that the US and the South wanted to coordinate "appropriate" reactions to North Korea's provocation.

Similarly, the United Nations Security Council agreed on Wednesday to implement new measures to punish North Korea for its provocation.

Although experts remain skeptical as to whether North Korea really has H-bomb capability, the announcement from the North has reignited fears in the international community over Pyongyang's efforts to build a warhead small enough to be mounted on a missile and capable of reaching the shores of the mainland US.