At least 88 people have been treated for minor injuries and light smoke inhalation after a 33-story building in the southeastern port city of Ulsan caught fire. 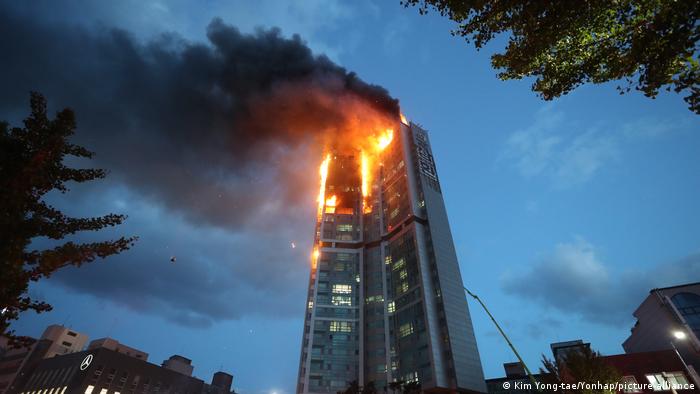 A 33-story apartment building in the South Korean city of Ulsan went up in flames early Friday after strong winds caused a fire to rise through multiple floors.

At least 88 people were being treated for minor injuries, according to South Korea's Ministry of the Interior and Safety. It was not immediately clear if there were any deaths or serious injuries.

Some media outlets showed footage of the building engulfed in flames and slabs of concrete falling to the street.

Hundreds of residents have been evacuated from the high-rise building, authorities said. Another 77 people who had escaped to the roof and other spots in the building were rescued.

While the cause of the fire is being investigated, the fire is thought to have started between the 8th and the 12th floors. Strong winds helped spread it further up. The fire is now under control.

The southeastern coast of South Korea was battered by very strong winds and heavy in August and September, with Typhoon Haishen touching down in Ulsan in early September.

Amidst the coronavirus pandemic, falling incomes, worsening fears about jobs and prolonged social distancing that is anathema to many South Koreans, the nation appears to be slipping into a crisis of mental health.

South Korea struggles to choose between US and China

Seoul is becoming caught in big geopolitical shifts, as China tries to use its economic clout to sway loyalty away from the US and undermine a security pact that has lasted 70 years.