Police in South Korea have stopped demonstrators from sending leaflets critical of the North across the countries' demilitarized border. It follows a threat of military action by Pyongyang last week. 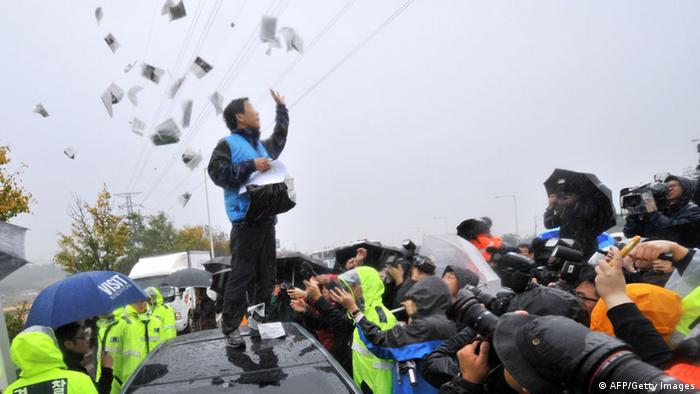 Soldiers and police blocked access to the planned launch site, at Paju in South Korea, around 60 kilometers (37 miles) north of Seoul.

It is understood that about 80 activists, some of whom were defectors from North Korea, had planned to send balloons carrying the leaflets. Activists frequently send cash and propaganda material across the border.

Last week, North Korea threatened a "merciless military strike" if the action went ahead on Monday. The announcement was unusually strong, and named the specific time and location of the demonstration, as well as issuing a warning for residents to evacuate nearby areas in case of reprisal.

It was also the first precise threat made under the regime of North Korean leader Kim Jong-Un, who came to power following the death of his father Kim Jong-Il last December. Troops in the South had been placed on high alert, and the Yonhap news agency reported units in the North had been seen preparing their guns for firing.

South Korea hit back, saying it would also retaliate against any attack from North Korea, and blocked the demonstrators on Monday to calm tensions.

"For security reasons, the activists were not allowed to launch balloons from the park," a South Korean police official told the news agency AFP.

There were minor scuffles between activists and police at the site in Paju. Their decision to block the balloon drop has drawn criticism from the demonstrators.

"This event has been authorized by the government. This is ridiculous," said Park Sang-Hak, one of the organizers.

"We are not here to provoke a conflict but to convey the truth to North Koreans. [South Korean] President Lee [Myung-bak] will be remembered as a cowardly leader who succumbed to North Korean threats," said Park.

The government in Seoul has called for restraint.

"We urge the North to stop the threats ... and have constantly asked the civic groups to refrain from such (propaganda) acts, in consideration of inter-Korea relations," said a spokesman from South Korea's Unification Ministry, which handles cross-border affairs.