South Africans celebrate Nelson Mandela′s birthday with a day of service | World| Breaking news and perspectives from around the globe | DW | 18.07.2009 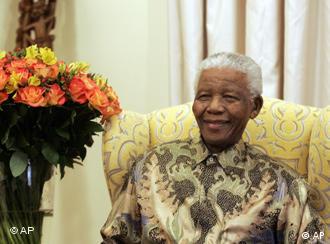 At 91, Nelson Mandela is inspiring his compatriots to serve others

Nelson Mandela turned 91 on Saturday and to honor the anti-apartheid activist and Nobel Peace Prize winner, South Africa has renamed the day Nelson Mandela Day. The South African government has called on its citizens to spend 67 minutes of their time on this day in service to the less fortunate and the marginalized.

The number 67 represents the number of years the former South African president has spent fighting for freedom, including 27 years as a political prisoner of the former apartheid regime. Mandela fever has gripped the nation as people visited convalescent homes, prisons, hospitals and clinics to make a difference in the lives of others.

Political leaders of South Africa, who also spent the day visiting the elderly and those afflicted with the HIV-Aids virus, agree. After President Jacob Zuma visited Mandela at his home in Johannesburg, he said that Mandela was an icon that everyone should emulate.

"His contribution, struggle for human rights, for reconciliation in a country that was divided…You know, we are the luckiest to have such an old leader who's still with us and we are very happy to celebrate his birthday.

Patricia De Lille of the Independent Democrats, one of the country's most outspoken political leaders, said she hoped the day would inspire widespread service.

"We do wish Madiba that this is not only on your birthday," she said, using the honorary title that has become synonymous with Mandela. "We have to develop a culture in South Africa where we show that we care and that we want to share just like you."

South Africa won praise for successfully hosting the Confederations Cup as a test run for to World Cup. But the country's poor did not join the celebration. They fear the upcoming sporting event won't benefit them. (12.07.2009)

Four months after a unity government in Zimbabwe was inaugurated, the human rights situation in the country has barely improved, says Amnesty International in its latest assessment. (18.06.2009)

Jacob Zuma is sworn in as president of South Africa

It is the fourth time that South Africans have democratically elected a new president since apartheid was abolished in 1994. Amid economic challenges, Zuma faces a difficult time bringing different factions together. (09.05.2009)