South Africa won praise for successfully hosting the Confederations Cup as a test run for to World Cup. But the country's poor did not join the celebration. They fear the upcoming sporting event won't benefit them. 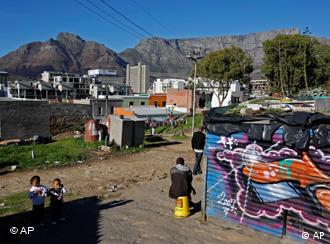 Many impoverished towns may not improve despite the World Cup

The empty seats during some of the recent Confederations Cup games were a clear indicator of the economic strain poor South Africans have to live with.

Even the international football federation FIFA's effort to issue free tickets to locals in an attempt to fill stadiums failed in its attempt to make the tournament popular among the country's poor.

Eva Davids did not receive a free ticket, but she would not have wanted one either. Four years ago, she was forcefully evicted from her house in Western Cape province of South Africa because the government needed space to construct a road in preparation for the World Cup. She is now a member of an NGO that fights evictions.

"It is already hard to find a (council) house. Now you are in a (council) house and get evicted," she said. Her family and their neighbours had to wait for years to find a new place to live. "We were so underprivileged. Sometimes there were more than 50 people living in one house."

She says the money spent in preparation for the event should have been invested in the education of poor South Africans, like her and her family. 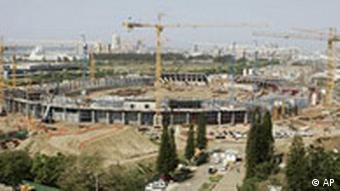 People had to make way for construction of World Cup facilities

But others tell a different story, like Ndivhuwo Mabaya, a spokesman from South Africa's Ministry of Housing and Human Settlement.

In his view, the new infrastructure will boost the economy and improve the lives of the poor as well. He also denies that there are evictions taking place.

"We are not evicting people, we are relocating people temporarily in order to prepare the land for development," Mabaya said. According to the ministry, all people will be resettled to new government-built houses.

Due to the huge popularity of football, the economic impact of the World Cup on South Africa is likely to be considerable. The International Marketing Council of South Africa believes that the World Cup will boost South Africa's image, often tarnished by news about violent crime. According to optimistic estimates, more than 450,000 tourists from overseas will visit the event.

The South African government plans to spend a total of $2.2 billion on new stadiums and infrastructure upgrades. According to President Jacob Zuma, 400,000 new jobs have been created - a welcome relief in a country where more the unemployment rates tops 20 percent.

But there are still concerns.

"This is not like that in building the stadiums they will develop skills that will translate into having long-term jobs that will give them a livelihood for the rest of their lives," said Ashwan Desai from the University of Johannesburg.

He says most jobs will be lost again once the World Cup has come to an end. South Africa has not been immune from the effects of the global recession and economic sectors such as the construction industry will decline once the World Cup preparations are over. 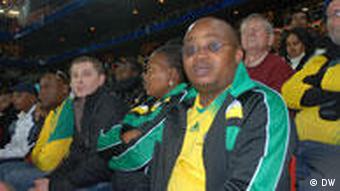 Perhaps the event can become a unifying factor for the country

Despite the ongoing debate about the strength or weakness of economic gains from the World Cup for ordinary South Africans, many football fans, both rich and poor, hope it will bring other benefits. They hope that the games will be a unifying factor in a society that is heavily divided along ethnic, social and gender lines.

Their dream is a repetition of the 2006 World Cup in Germany, where fans from all walks of life came together to cheer on their national teams.

The World Cup in South Africa is exactly one year away. Numerous problems raised doubts about South Africa’s ability to finish in time, but things are right on schedule now, and anticipation is high. (10.06.2009)

In his latest book Moeletsi Mbeki blames African elites for not doing enough against poverty on the continent. The former South African President Tabo Mbeki's younger brother's tale is one of missed opportunities. (27.06.2009)