Floods and mudslides triggered by heavy rain have caused widespread damage around the port city of Durban. The number of dead is expected to increase. 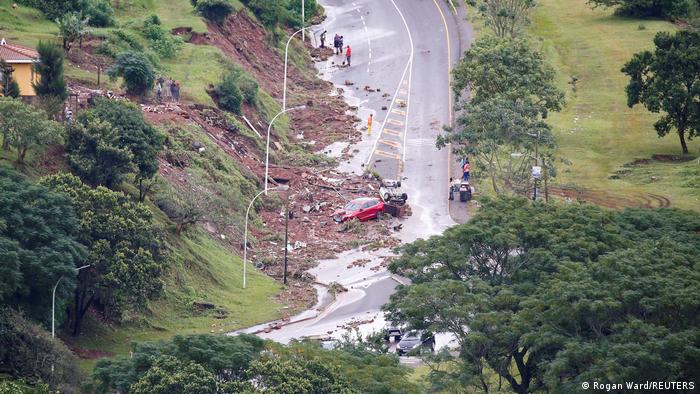 Heavy rains have caused widespread damage in the coastal province

At least 45 people have been killed in recent flooding that hit the South African province of KwaZulu-Natal, authorities said on Tuesday.

"The latest reports indicate that over 45 people have lost their lives as a result of the heavy rains, this number could possibly increase as more reports come in," the province's Department of Cooperative Governance said in a statement.

Officials are still assessing the full extent of the damage, but provincial premier Sihle Zikala said more than 2,000 houses and 4,000 "informal" homes — or shacks — had been damaged.

Officials have also told residents to stay indoors and for those living in low-lying areas to seek higher ground.

Rescue workers have been deployed the last few days to evacuate people from the worst affected areas. The military was also sent in to help in Durban and the surround eThekwini metropolitan area.

Emergency services have also been responding to calls from people trapped inside their homes, but said that the number of calls had started to decrease.

"There are still cases of collapsed buildings where operations are still continuing,'' emergency services spokesman Robert McKenzie told The Associated Press on Tuesday.

"Most of our power stations have been flooded and our teams are working hard to restore power to the affected areas," Moxilisi Kaunda, mayor of the eThekwini metropolitan municipality, told a press briefing Tuesday.

"Our teams are on the ground to try and return the situation to normalcy," he said. "We continue to assess the damages, we cannot be sure of the extent of the damages at the moment.''

The city was hit by large-scale riots last summer, which led to the looting of shopping malls and the burning of warehouses.