The Kenyan authorities have detained more than 3,000 people in an operation aimed at flushing out Islamist militants.The detainees' identities are being checked and dozens have been deported to Somalia. 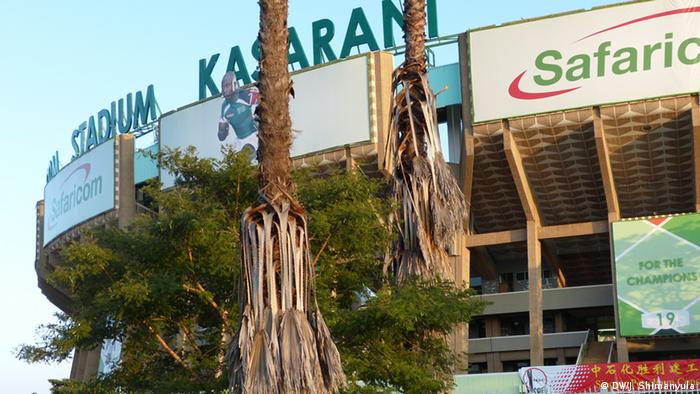 The Kenyan security forces are continuing a major crackdown on suspected Islamists from Somalia. Thousands have been rounded up in the capital Nairobi. Many have been detained in the city's Kasarani football stadium as the process of checking their identities continues.

The operation follows a spate of attacks in Kenya by suspected supporters of Somalia's Al-Qaeda-linked al-Shabab rebels.

The crackdown began on Friday (04.04.2014) and has focused mainly on the Eastleigh district of Nairobi which is inhabited largely by ethnic Somalis and is often referred to as 'Little Mogadishu.'

Three blasts in Eastleigh on March 31 that killed six people appear to have triggered the latest police crackdown, although frequent swoops on Somalis have been taking place since last September's deadly siege of the Westgate shopping mall in Nairobi for which al-Shabab claimed responsibility. 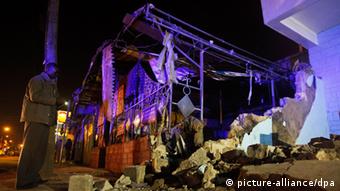 Shortly after the arrests began, the United Nations refugee agency UNHCR issued a statement expressing its concern at the action taken by the Kenyan authorities ans seeking clarification.

"In line with its mandate, UNHCR has sought access for itself and its partners to the detained refugees and asylum-seekers. This access will allow UNHCR to properly identify refugees, asylum-seekers and others of concern. It will also allow the agency to provide assistance to the detainees and obtain their release where appropriate," the statement said.

On Thursday, almost a week after the operation began, UNHCR officials were allowed to enter the stadium which is now functioning as a temporary police station. The UN agency had previously requested the Kenyan law enforcement agencies to "uphold the rights of all those arrested and to treat them in a humane and non-discriminatory manner."

Among those waiting outside the stadium on Thursday for news of their relatives was 29 year-old Abdullahi Osmad Ahmed, a shopkeeper in Eastleigh. This was his fourth visit to the stadium to find out what had happened to his sister in law. He told DW that all that he and others had been told so far was that they would have to wait.

"The officers who are in charge at the gate tell us to be patient because the screening process is going on. They say as soon as they are finished we will be given enough opportunity to see our relatives," he said.

Also outside the stadium was Yassin Ahmed Omar. He described the long wait as a trying and painful experience. 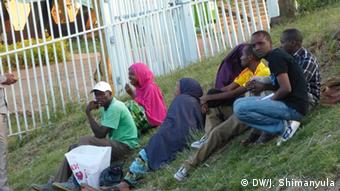 People wait outside the stadium for news of relatives

"I have been here for nearly six days. Government officials say our relatives are eating but we don't know for sure. They just say so," he complained.

It appears that the swoop also netted some non-Somalis unable to prove their identities. 26 year-old Cecilia Kemunto was at the stadium hoping to find her missing husband, a Kenyan national.

Dozens of Somalis have been expelled and flown to Mogadishu. The Somali ambassador to Kenya, Mohamed Ali Nur, said that those sent home included women and children.

The crackdown coincides with the first anniversary in office of President Uhuru Kenyatta. In a recent state of the nation address, he told Kenyans that "the safety of our people and the defense of Kenya's sovereignty are among my cardinal responsibilities. We will not be intimidated; threats to our sovereignty will be met with our full might."

Since his inauguration as Kenyan president one year ago, Uhuru Kenyatta has failed to implement most of the election promises he made and concerns about security in the country are growing. (08.04.2014)

Three near-simultaneous blasts in downtown Nairobi have killed at least six people, according to Kenyan officials. The blasts occurred in an area known for its large Somali population. (31.03.2014)

Islamist militants fighting in Somalia are trying hard to recruit young Somalis. But a young refugee, Shiine Ali, is determined to turn his peers away from Islamic extremism - with his hiphop music. (26.03.2013)