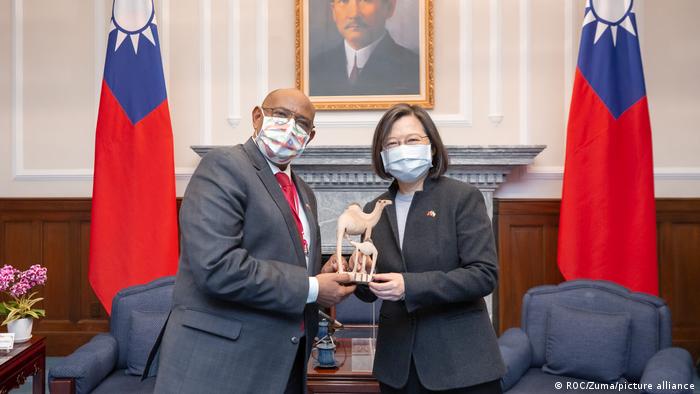 Taiwan and Somaliland find themselves in a similar position with both being self-governing democracies that remain unrecognized by most of the world.

What did Somaliland and Taiwan officials say about ties?

Kayd applauded the "special and historical relationship" between "our two countries," which he referred to as the "two champions of democracies in Africa and Asia."

"This historic visit marks an important milestone," he said during his meeting Taiwan's President Tsai Ing-wen.

"All coercive or threatening measures to deny such collaboration between international partners... do little to promote the peace and security that the region and the world require."

Tsai hailed the relationship as one of her administration's chief diplomatic breakthroughs.

During the meeting, Kayd said Somaliland welcomed "giant" Taiwanese companies to invest and trade with them.

"In the mining sector, Somaliland has huge potential for foreign investment, including hydrocarbon deposits, oil and gas, as well as coal, which can be easily explored," he said. "We are encouraging maximising trade and investment potential rather than aid dependency."

Why are Somaliland and Taiwan diplomatically isolated?

Somaliland and Taiwan have pursued stronger ties after swapping de facto embassies in 2020, much to the ire of China and Somalia.

Somalia referred to the establishment of the representative offices as a "reckless attempt" to infringe on its sovereignty. China accused Taiwan of "acting with desperation."

Somaliland declared independence from Somaliaduring the 1991 civil war but remains unrecognized by much of the international community. Despite Somaliland being a picture of stability in the region, Somalia refers to it as an infringement on its sovereignty.

Similarly, China sees Taiwan as its own territory, indulging in saber-rattling, which has increased markedly under President Xi Jinping.

Taiwan has diplomatic ties with just 14 countries, including just one African nation, the kingdom of Eswatini, formerly known as Swaziland.

Neither Taiwan or Somaliland is recognized by the United Nations.