A series of explosions have claimed the lives of Kenyan police officers and Somali civilians. The attacks, claimed by al-Shabab jihadists, came after a rival militia executed a group of civilians. 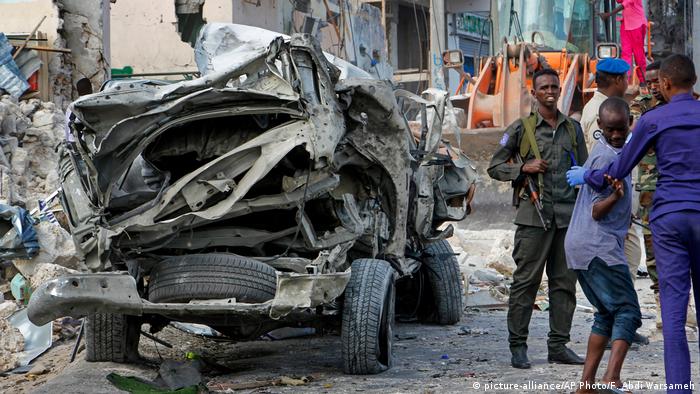 At least eight people were killed when a car bomb exploded near the Somali parliament in the capital of Mogadishu on Saturday. Another 16 were injured, according to doctor Abdiqadir Aden from the private Aamin ambulance service.

Local shopkeeper Naimo Ali said the "huge" blast had destroyed a part of her shop.

"I saw several people strewn in the road and some of them were motionless," she added.

Elsewhere in Mogadishu, security services at a checkpoint managed to spot another car bomb and open fire at it, killing a man in the car, which then exploded. No other casualties were reported in that incident.

Another blast targeted a vehicle transporting police officers in Kenya, near the Somalian border. Kenyan forces fight al-Shabab jihadists in the region, including on Somali territory with the aid of a local Somali militia.

The transport was carrying 11 officers when it was "hit by an improvised explosive device," said police inspector general Hilary Mutyambai. He did not say how many people were killed or injured. However, a regional police source told the AFP news agency that eight police officers lost their lives in the attack.

The incidents came after a Somali militia executed nine civilian members of the Rahanweyn clan, which is suspected of having links to al-Shabab, as retribution for the killing of a policeman by al-Shabab. Witnesses outside the central city of Galkayo said militia gunmen picked up their victims from the streets or their homes before executing them.

"All of the civilians belong to one clan and the gunmen shot them dead in one location a few minutes after suspected Shabaab gunmen killed a policeman," he added.

"This is an unacceptable act and we will bring those perpetrators to justice," said Hussein Dini, a traditional elder.

"Their killing cannot be justified. It seems that the merciless gunmen were retaliating for the security official who they believe was killed by al-Shabaab gunmen belonging to the clan of the victims."

Al-Shabab has been fighting to topple the government and install Sharia law for over a decade. They were pushed out of Mogadishu in 2011 but continue to wage guerilla war in rural parts of the country.