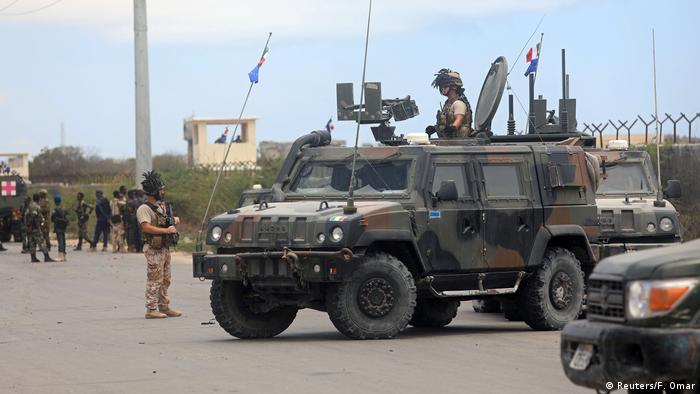 The first attack struck the gate of a military airstrip operated by US special forces in the town of Belidogle, about 100 km (60 miles) west of the capital Mogadishu, officials said.

The Somali Islamic extremist group al-Shabab said it was behind the strike on the base, which is used to launch drones and train Somali troops.

Yusuf Abdourahman of the Lower Shabelle regional administration said a firefight broke out after two car bombs went off at the site's entrance.

"There was a car bomb targeting the EU military advisers along the industrial road. A vehicle loaded with explosive was rammed onto one of the convoy vehicles and there are casualties," Somali security officer Omar Abikar said.

The US Africa Command said in a statement that "no US or partner force personnel" were injured in the attack, adding it responded with "two airstrikes and used small arms fire," killing 10 militants and destroying one vehicle.

Italy's Defense Ministry said in a statement that no injuries had been reported so far, and that Rome was investigating the cause of the blast.

Al-Shabab is an al Qaeda-linked group fighting to overthrow the UN-backed Somali government and enforce its own harsh version of Islamic law. The rebels were expelled from Mogadishu in 2011, but they still carry out frequent attacks and bombings against government and military targets.

The US Africa Command said US efforts "seek to set the conditions for the return of civil governance in the region."

It's been 50 years since Somalia last conducted a "one-person one-vote" election. With the support of the African Union the electoral commission is hoping for polls in 2020. But there is still much that needs to be done. (23.06.2019)

The militant Islamist group al-Shabab's biggest source of income is generated by extorting money from businesspeople all over Somalia. Those who refuse to pay end up paying an even higher price.