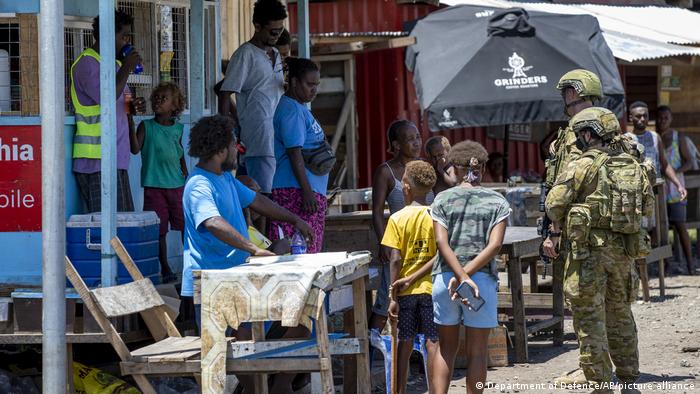 Fiji on Monday joined Australia and Papua New Guinea as part of an international peacekeeping force of 200 police and troops sent to quell violent anti-government protests in the capital of the Solomon Islands, Honiara.

"Out of concern for the safety and well-being of our Pacific sisters and brothers in the Solomon Islands, 50 Fijian troops will dispatch to Honiara tomorrow as part of reinforced platoon embedded with Australian force elements to help maintain peace and security," said Fijian Prime Minister Frank Bainimarama on Monday.

On Friday, Australia sent a contingent of 100 police and soldiers to Honiara to support local police. They were joined by more than 30 troops from Papua New Guinea.

What is causing the unrest?

Although calm has largely been restored, tensions remain high. The Red Cross has warned of food shortages in the capital.

Inter-provincial tension is also driving unrest. Many of the protesters reportedly came from Malaita province, a neighboring island that has a history of disputes with Guadalcanal province where the government is based.

For example, Malaita opposed the decision by the government of government Prime Minister Manasseh Sogavare in 2019 to formally recognize China instead of Taiwan.

On Monday, Malaita's provincial premier, Daniel Suidani, spoke out against the presence of Australian troops in the Solomon Islands, claiming they were deployed on Sogavare's behalf.

His advisor Celsus Talifilu said in an interview that the troops' presence on the ground "gives a very strong moral boost to Prime Minister Sogavare and his government. They are here at the invitation of Sogavare."

Australian Prime Minister Scott Morrison said on Sunday the troops were there to provide a stable environment and maintain peace, and did not want to "interfere in their democracy."

Last week, Sogavare said investigations would continue into the unrest. "We will not stop until we get all the people who masterminded the lawlessness to face the law," said Sogavare last week.

The Solomon Islands' parliament is set to resume today. A no-confidence motion has been filed against Sogavare, and four members of parliament resigned over the weekend.