The sun has emitted two huge solar flares - one of which was the biggest in more than a decade. While solar flares and winds don’t really pose a direct risk to human health, they could bring down communications. 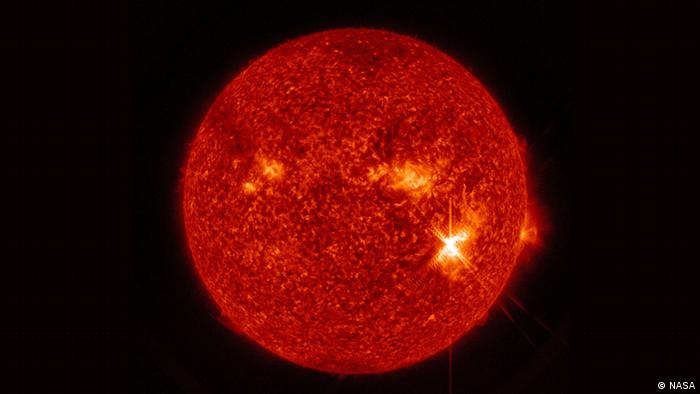 The two bursts of radiation from the sun were so intense that high-frequency blackouts were experienced on Earth, lasting for about an hour.

Both were X-class flares – the most intense classification of coronal ejection – with the second being the biggest observed since 2006.

NASA's Solar Dynamics Observatory, which is constantly looking at the sun, captured images of both events.

The largest X-class flares are by far the largest explosions in the solar system, with loops of material tens of times the size of Earth being spat from the solar surface. They're caused when magnetic fields – which guide the motion of the sun's plasma – cross over each other and reconnect.

At their largest, such events can produce as much energy as a billion hydrogen bombs.

While harmful radiation from such flares cannot pass through Earth's atmosphere to harm humans on the ground, they can disturb the atmosphere where GPS and communications signals travel.

Read more: If it's not aliens, what are those 'peculiar signals' from red dwarf star Ross 128?

The initial radiation from the solar flare would have created the radio disturbances experienced on Wednesday.

The giant clouds of charged particles thrown out by the sun – known as a coronal mass ejection – could result in a radio blackout later, possibly on Thursday or Friday.

On the way here?

When directed at Earth, such flares create radiation storms that affect satellites and communications systems, even affecting technologies on the ground.

On the plus side, it might mean there'll be a chance for sky watchers in higher latitudes to see the aurora borealis, or its southern counterpart the aurora australis.

At present, scientists are looking at date from sun-watching satellites to see if the clouds are heading this way.

The first flare was measured at X2.2, with the second at X9.3. The number indicates the intensity of the burst.

The biggest solar flare in modern times was in 2003 and it was off the charts, being recorded at X28.