Solar energy from the farm | Environment | All topics from climate change to conservation | DW | 17.11.2016

Solar energy from the farm

Solar panels on top, wheat and potatoes down below: researchers aim to make farmers' fields twice as productive with a revolution in power generation. A pilot facility in southwest Germany is exploring the new concept. 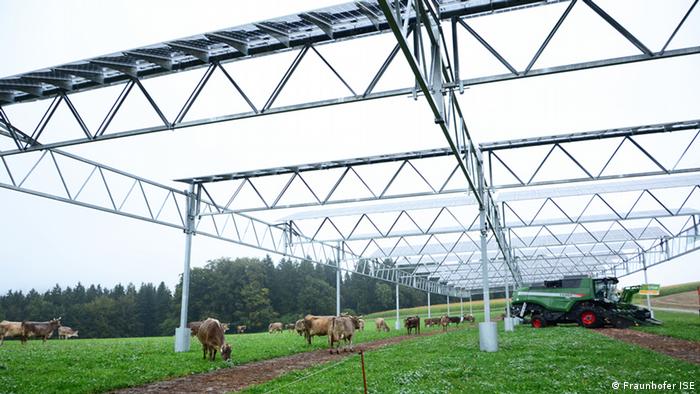 Feeding the world's growing population requires land, especially if crops are to be grown in an environmentally friendly manner. But space for such crops is becoming increasingly limited.

"Agricultural land areas are not available in unlimited quantities," said Petra Högy, a professor with the Institute of Landscape and Plant Ecology at the University of Hohenheim, in southern Germany. "Therefore, it makes sense to double up and use available land for both the production of food and of energy."

A reservoir not far from London has been fitted with 23,000 photovoltaic panels to make it the world’s largest floating solar farm. The site generates enough power to run the local water treatment plants for decades. (19.09.2016)

Over 1.2 billion people on earth have no access to electricity and 75 percent of medicines and vaccines, which need cool storage, are damaged due to immoderate temperatures. The Coolar refrigerator, which works with solar heat, could just be the solution. (12.09.2016)

Improved soil management practices and better farming habits are putting smiles on the faces of women in Bafut, a community located about 400 kilometers (240 miles) from Cameroon's capital Yaounde. (02.09.2016)

Germany's model transition to clean energy can mean conflict with conservationists. In Bremerhaven, an environment group has blocked plans for an offshore wind power port with a court order. A conundrum to be avoided? (26.07.2016)

In a pilot project near Lake Constance, on the German-Swiss border, researchers from several institutes are checking out the possibilities and advantages of this approach.

On 2.5 hectares (around six acres) of agricultural land, an organic farming company is growing wheat, potatoes, celery and a mixture of clover and grass - part of it under photovoltaic panels mounted on stands at a height of five meters (16.5 feet). Another section of the field is farmed in the usual way, not shaded by solar panels.

This comparison should show what kinds of vegetables or crops are particularly suited for agrophotovoltaic (APV) production. "Based on previous simulations, we believe potatoes grow slightly better under the solar panels. Wheat, by contrast, grows slightly worse," Högy told DW.

With funding from the German Education and Research Ministry, agronomists will use sensors and soil samples over the next three years to measure the differences in crop growth, biodiversity and crop yields.

Similar sites already exist in France, Italy and Japan. "In principle, the process is working," said Stephan Schindele, project manager with the Fraunhofer Institute for Solar Energy Systems based in Freiburg. "Experience has shown that when it comes to agriculture, there is very little loss." However, systematic research on the optimal combination between crops and solar panel infrastructure has not yet been done.

For the pilot project in Germany, researchers first simulated shadows with computers and developed the best possible system for the combined production of food and energy. Later, sufficient space on the field for large machines and a greater distance between the rows of solar modules "ensures an optimal distribution of solar energy on the agricultural area," said Schindele.

The substructure for the modules adds to the cost of the solar panels, making the power generated on the fields more expensive. "The production cost for the electricity produced by the pilot project will be 11.3 euro cents (around 12 US cents) per kilowatt hour," explained Schindele.

But, he added, the more these facilities are built, the cheaper they'll be. According to the expert, with a return of ten cents per kilowatt hour, these investments would be profitable for German farmers.

The price for this power generation remains lower than for wind energy generated at sea. According to Schindele, the potential for agrophotovoltaics in Germany lies at 25 to 50 gigawatts, which would cover up to eight percent of Germany's electricity demand. 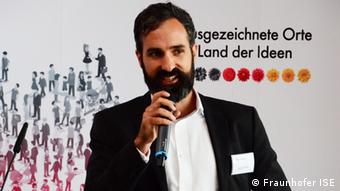 Schindele: The more these facilities are built, the cheaper they'll be

According to Schindele APV has  potential worldwide, especially in sunny regions. In areas like the Middle East, solar power generation is particularly cheap and could replace diesel generators used to power agricultural water pumps.

He also believes the shadows generated by the solar panel installations, in combination with improved water technology, could offer countries in the Mideast "new possibilities for agricultural production."

As an example Schindele gives Qatar, which has been receiving agricultural advice from the Fraunhofer Institute. Today, the country only produces two percent of its food - the rest is imported at high prices. With this new technology, Qatari farmers are now considering the idea of producing up to 30 percent of their own food on revitalized desert land, said Schindele. And with a combination of shade from the photovoltaic systems and seawater desalination, he believes it would work.