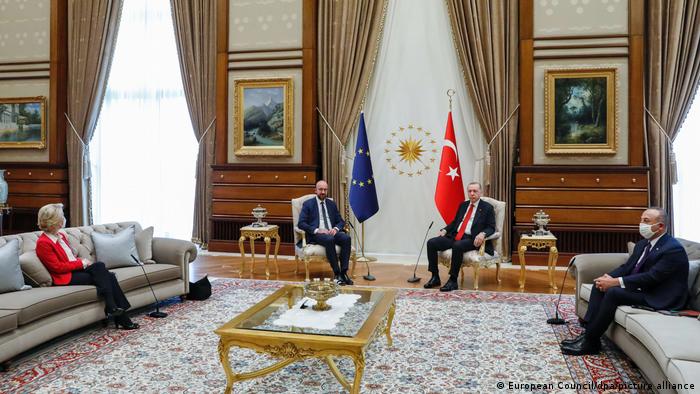 European Commission President Ursula von der Leyen made a plea on Monday to advance women's rights as she opened up about the incident dubbed "sofagate."

Three weeks ago, von der Leyen was seated apart from her male counterparts during a meeting of EU leaders with Turkish President Recep Tayyip Erdogan in Ankara.

The incident showed "how far we still have to go before women are treated as equals. Always and Everywhere," the EU Commission chief said as she called for action towards women's rights.

What did von der Leyen say?

Ahead of a parliamentary debate on EU-Turkey ties, von der Leyen said that she had not been treated in accordance to her status because of her gender.

"I cannot find any justification for (how) I was treated... I have to conclude that it happened because I am a woman,'' she said. "Would this have happened if I had worn a suit, and a tie?''

"I felt hurt and I felt alone, as a woman and as a European."

But the EU chief recognized that she held the privilege to be able to fight back, unlike millions of women who cannot.

Thousands of far more serious incidents go unobserved every day, von der Leyen said as she slammed Turkey's withdrawal from the Istanbul Convention on the Protection of Women.

Von der Leyen said she wants the EU to join the convention but that some member countries are blocking the move.

How did Charles Michel react to 'sofagate'?

Erdogan had hosted EU Council President Charles Michel and von der Leyen, but she was seated alone on a sofa as only two chairs were provided.

Von der Leyen stood looking at the seated men, expressing her astonishment with an "ehm" sound and a gesture of frustration.

Following the gaffe, Turkey insisted it had followed the EU protocol requests. However, the European Council head of protocol said his teams was not given access to the room where the photo op took place.

Michel apologized on Monday for the incident. He said he should have given up his seat but he had feared prompting a broader diplomatic conflict, especially given the strained relations between Turkey and the EU.

After 'sofagate,' some European officials emphasized that Michel held seniority in the diplomatic hierarchy.

Von der Leyen did not publicly blame Erdogan or Michel for the incident. But she has insisted that she expects to be treated equally with her fellow EU chief.

She is the first woman to be president of the European Commission.