Air travel is bound to look fundamentally different from the times before the coronavirus crisis. Changes will be visible at the airport and in the cabin, as Andreas Spaeth reports. 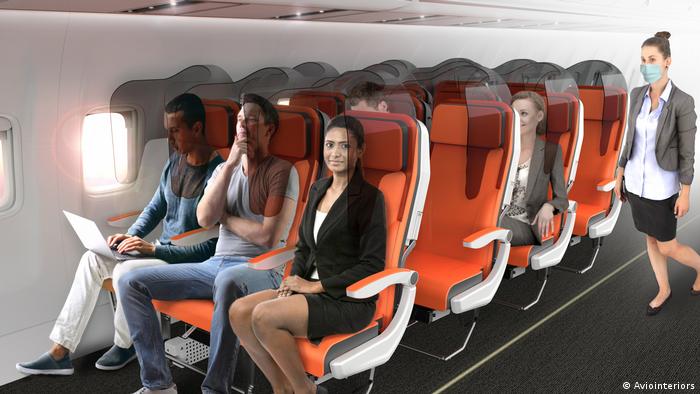 Michael O'Leary is against it. "If they do that, we're not returning to flying at all," the Ryanair chief executive recently announced defiantly. There is already an intense discussion on how passenger air travel can be resumed once the sweeping restrictions to contain the coronavirus are lifted. One of the key questions is: Should middle seats on aircraft be left vacant?

One thing seems to be clear: There is no easy return to the world as we knew it in aviation before the coronavirus, likely none at all.

This threatens the business model of an airline like Ryanair, which is known to squeeze in as many passengers as possible and keeps its aircraft on the ground for only short turnarounds before sending them up again, allowing it to fly more than others. This model might be fundamentally thrown into doubt with the now required regular, thorough cleaning of aircraft and lengthier boarding procedures to keep passengers apart from each other, which would inevitably increase ground times.

So far, there's been no evidence of any infections onboard aircraft. The aviation industry keeps stressing that cabin air is at least as clean as the air in operation theaters, thanks to high-performance air particle filters. The risks are further mitigated by the cabin air streaming downward. It hasn't also been proven that vacant middle seats lower the risk of infection. Still, many airlines like Lufthansa Group, including Eurowings, currently block middle seats. Likewise, easyJet is promising travel without a direct seat neighbor at least initially once it restarts operations.

"It's purely a cosmetic measure and there is no scientific justification that it would help," says Shashank Nigam, CEO of aviation consultancy Simpliflying. But psychology currently does play a role. "We will continue to enable a safe travel experience that has to become visible for the passenger to build up trust," promises Ingo Wuggetzer, vice president of Cabin Marketing at Airbus. 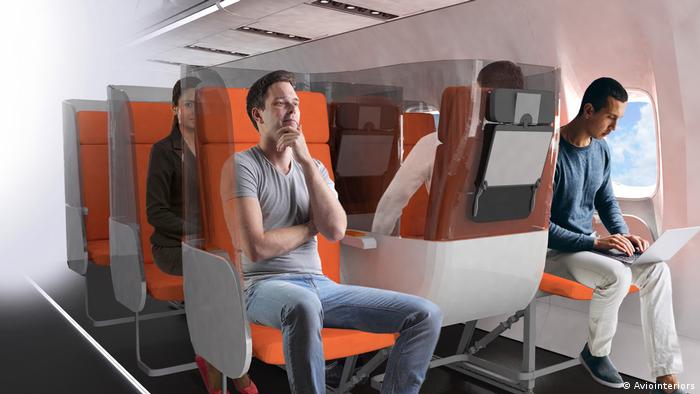 A different arrangement of seats, also proposed by Aviointeriors

Simpliflying paints a sobering picture of how air travel might look like in the age of sanitized travel. "The changes will be as far-reaching, if not more so, than the ones introduced after 9/11 and will be here with us to stay," claims Nigam. "In addition to security checks, you will have a sanitation element added on top."

In a recent report, Simpliflying says a journey by air will roughly look somewhat like this: As part of the online check-in process, passengers will be required to upload an immunity passport confirming the presence of antibodies for COVID-19. At the airport itself, travelers will be required to arrive at least four hours before departure.

Even before passengers can enter the actual check-in area, they will have to pass through a disinfection tunnel and thermal scanners. A newly founded Transport Health Authority, similar to the TSA created in the US after 9/11, could define standards in cooperation with the World Health Organization and airport and airline groups.

"We have to get our act together to implement similar measures all over the world that the traveling public understands," demands Christoph Müller, an airline veteran and former CEO of Aer Lingus and Malaysia Airlines, among others. "We need a kind of safety net. There's nothing worse than people not getting on board for fear of getting infected," says Müller.

But if the regulations laid out by Simplifying become a reality, they may also put off many from using air travel in the future.

In addition to new regulations expected to be introduced by many countries, it will become mandatory to wear masks while flying. This is also suggested by the German airline lobby BDL in its concept paper on restarting air travel.

It pledges to make sure that during boarding, flight and deplaning, every passenger wears a mask. It also talks about an obligation for passengers to bring their own masks. In Canada, this regulation already exists; in the US, JetBlue has become the first airline to impose it on passengers. 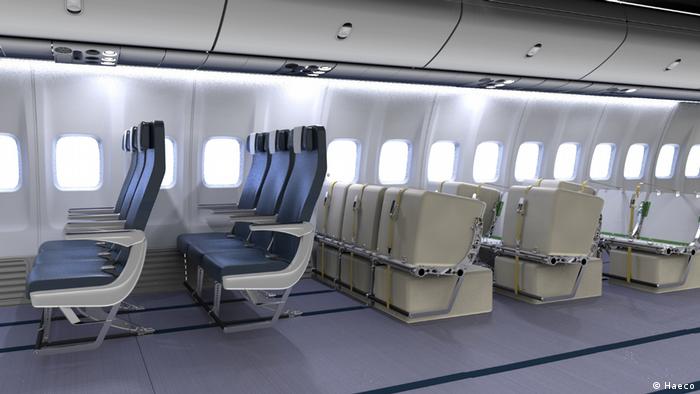 Lufthansa passengers are to be compelled to wear a mask covering the nose and mouth and to be requested to keep them on throughout the flight, with the new measure going into force on May 4. The airline said it planned to require the wearing of masks on all the airlines in the group at least until August 31.

In the future, all checked bags as well as cabin bags will go through a UV disinfection process to be "sanitagged," as the authors call the hygiene approval, which would include other health checks as well. Gone are the times of mad dashes straight to security and to the gate. Soon, it might be inevitable to be at the checkpoint two hours before departure.

The actual boarding would take place in small groups keeping in mind social distancing norms, with the jet bridge potentially serving as another disinfection tunnel. On board, many things are likely to change, starting with the seats. For the first time, seat manufacturers have now revealed their designs for the post-corona era.

Aviointeriors from Italy is promoting its "Glassafe" design featuring plexiglass hoods in the shoulder and head sections of every seat, reminiscent of old telephone booths. The more elaborate "Janus" seat, named after the two-faced Roman god, features a middle seat turned 180° and facing the rear of the aircraft, fenced off from its neighbors by plexiglass walls.

"A hygiene divider could be an intelligent combination of the requirements of comfort/privacy and hygiene/distance," says Ingo Wuggetzer of Airbus.

So far no airline has ordered such post-corona cabin furnishing. Asian company Haeco is taking a pragmatic approach in proposing to alternate seat rows with rows of stored cargo in the cabin. This would not only create more distancing but also provide better aircraft loads at times like now, when demand for cargo capacity is bigger than for seats.

In any case, passenger experience will soon be very different: Cabin crews will wear protective clothing, the passengers will wear gloves and masks, with the cabin being fogged for disinfection before departure and the crew offering hand sanitizer every half hour, while in Business and First Class, only packaged and sealed meals will be distributed.

Dedicated inflight janitors will ensure cleanliness of toilets and galleys throughout the entire flight. After landing, the immunity passport will be verified again and one has to pass through a thermal scanner, bags will be "sanitagged" again before being placed on the conveyor belt. Like this, flying probably won't be much fun anymore for many.

"Depending on time and availability of a vaccine, some elements will be kept, others will disappear," predicts Ingo Wuggetzer.