Soccer Ball Stitchers Face a Tough Game | News and current affairs from Germany and around the world | DW | 14.02.2006

The upcoming World Cup has increased the popularity of soccer balls. It's also the ideal opportunity to draw attention to the conditions in which they are made. 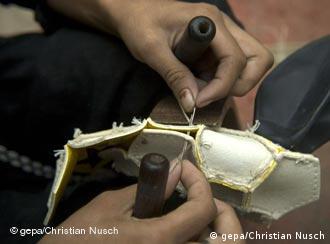 Most soccer balls are sewn by hand

With less than four months to go before the World Cup kicks off in Munich on June 9, Europeans have been hit with soccer fever. Fans are rushing to buy their favorite team's jerseys and are already munching on soccer-inspired sweets.

Of course, many enthusiasts want to kick a ball around themselves and retailers have seen an increased demand for soccer balls. Many consumers, though, are unaware of the conditions surrounding the production of this popular merchandise.

Around 80 percent of the world's soccer balls are produced in Sialkot in northeastern Pakistan -- by hand. It takes about an hour-and-a-half to sew together the 32 honeycomb-shaped pieces of synthetic leather with 650 stitches.

The region has developed into a worldwide center for producing sporting goods. But up to a decade ago, making balls was mainly a cottage industry in peoples' homes. Human rights organizations then drew extensive attention to the often dire working conditions and the use of child labor. Today, the production facilities in Sialkot are monitored.

"The problem, though, is that fake balls are produced outside of this zone and one can't rule out that children are sewing them," said adidas corporate PR manager Anne Putz.

Adidas has supplied the official match balls used at the World Cup since 1970. The ball for the 2006 World Cup is manufactured in Thailand. However, it is not sewn, but is instead melded together by thermal-bonding technology.

The sporting goods giant does have other balls produced by hand in Sialkot, though, Putz said. Adidas is one party of the so-called "Atlanta Agreement." In 1997, the sporting goods industry, labor organizations, child welfare groups and other non-governmental organizations agreed to participate in the program to eliminate child labor in Pakistan's soccer ball industry. 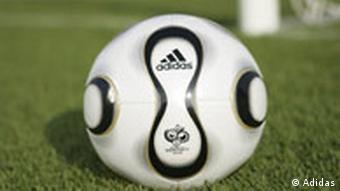 The World Cup ball is named "Teamgeist" or team spirit

International brands pledged to purchase soccer balls in Pakistan exclusively from companies in good standing with the program, which is also backed by world soccer body FIFA.

The Atlanta Agreement got ball production out of the home and into stitching centers, which can be monitored more easily. Child labor has to a large extent disappeared from this sector.

Wuppertal-based gepa was one of the first fair trade organizations to set up stitching centers in Sialkot -- along with its partner there, Talon Sports -- back in 1998. These include village-based facilities solely for women.

"Since women are not allowed to work together with men in Pakistan, this gives them an opportunity to have a job and improve their families' incomes," said Schimmelpfennig. 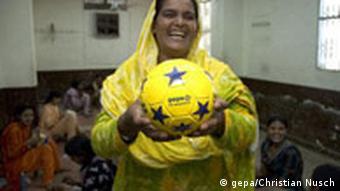 Gepa adheres to a bonus system, whereby it pays Talon a premium between $0.40 and $1.00 (0.34 and 0.84 euros) per fairly produced soccer ball, depending on the quality. The Talon Fair Trade Workers Welfare Society -- comprised of stitchers and Talon representatives -- decides where the funds will be allocated.

"Part of this premium goes into increasing wages and another part into a fund for small loans," said Schimmelpfennig. "The loans, for example, can help workers set up another leg to stand on, as soccer ball production can be very seasonal work."

The premiums are also used to improve working conditions in the stitching centers and to set up health and education facilities, such as a pre-school for workers' children. Healthcare for Talon's workers and their families is free.

Talon employs 1,500 stitchers, including 400 women. Rahila, for example, earns about 74 percent more for a fair ball of the most widespread quality than a conventional one: 47 rupees (0.65 euros) instead of 27 rupees. With that wage, the 40-year-old mother of eight can make a considerable contribution to her family's livelihood.

The people behind the balls

In the run-up to the World Cup, gepa has launched its campaign "Fair Pay -- Fair Play" to make consumers more aware of the conditions behind soccer ball production.

"Especially now, with the World Cup approaching, cheap balls and forgeries are a serious problem," said Schimmelpfennig. While fair balls can make a difference. 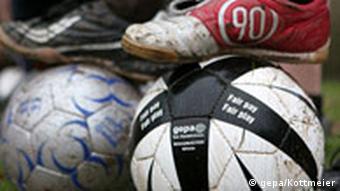 Gepa got the ball rolling with fairly produced balls

"Our concept sees aid as part of the retail process," said Schimmelpfennig. Instead of consumers donating to a project, they instead pay more for a fairly produced ball. "This gives us the leeway for these measures."

"In Europe, people want to buy inexpensive balls and that impacts wages," said Ammar Faisal Al Assad, director of Talon Sports. "But because of fair trade, many people have become aware of the people behind the balls."

DW-WORLD's dossier about the German World Cup's many facets

A "Passion" for Soccer

Soccer fans have a religious devotion to the sport. So it's fitting that the World Cup opening ceremonies will be staged by the director of the Passion Play. And, that fans can settle into a pew to watch the matches. (Oct. 1, 2005)

Against a backdrop of stubborn unemployment figures and wage-dumping concerns, a study has revealed that some 15,000 people in Germany can be described as modern-day slaves. (May 23, 2005)