Heavy snowfall has caused travel chaos and brought record drifts to parts of central Japan, with weather experts warning more snow was on the way. Thousands have been left without power. 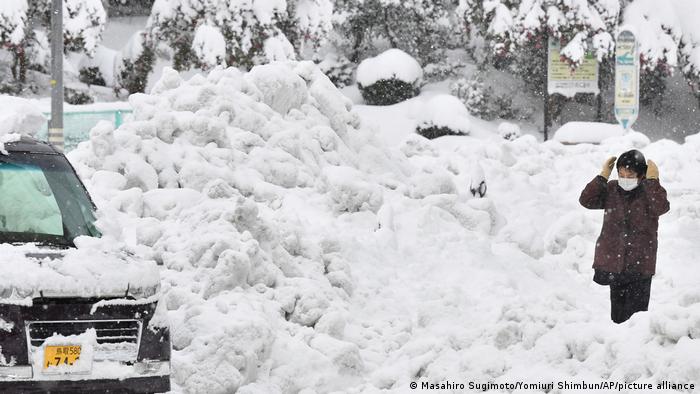 Power outages were reported by over 3,200 houses in the region, Kansai Electric Power said.

Weather officials have warned of more snow overnight along the Sea of Japan coast on Japan's northwest, from the Tohoku to Kyushu regions.

Government spokesperson Hirokazu Matsuno said no injuries or fatalities due to the extreme weather conditions have yet been confirmed.

"The amount of snow is expected to increase tomorrow," he warned, adding that "increased caution and vigilance are still required."

Japan's Meteorological Agency has forecast that snow and blizzard conditions will continue until Tuesday, The Japan Times reported.

The weather agency also said some regions could see up to 90 centimeters (35.4 inches) of snowfall.

The traffic snag is reported to have begun when a truck slipped, but the flow of traffic was later restored.

The city of Asago saw 71 centimeters of snow fall in 24 hours through early Monday.

Both Hikone and Asago witnessed the most snow ever, Kyodo News said, citing the Meteorological Agency.

Some 200 passengers also spent the night, snowed in, on a local train line, NHK said.

Around 130 domestic flights were grounded on Sunday while 50 flights were reported to have been scrapped on Monday.