Former CIA analyst Edward Snowden has called on the United Nations to take steps to ensure individual privacy and promote human rights. The whistleblower was honored with the Right Livelihood award on Monday. 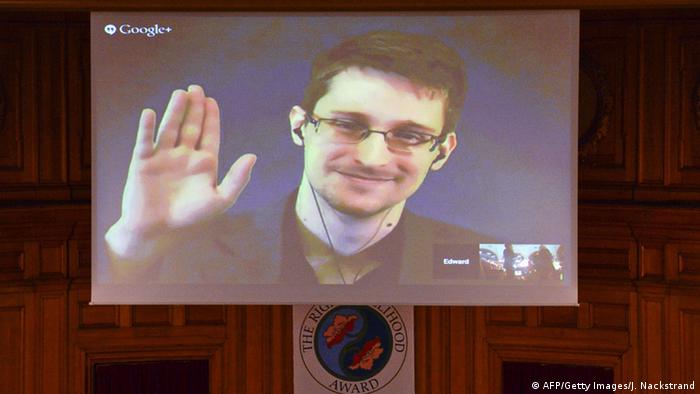 Edward Snowden received the Right Livelihood prize in the Swedish parliament in absentia. The awards founder Jakob von Uexkull said: "Snowden was prevented from participating because of the risk it involves for him to leave Russia at the moment."

The former CIA analyst is now in Russia on asylum and faces arrest in the US on charges of espionage and for exposing telephone and data collection programs used by the National Security Agency (NSA). If found guilty, he faces up to 30 years imprisonment.

The whistleblower received a standing ovation from the delegates as he addressed the gathering through a video link. The Right Livelihood award, also known as the "alternative Nobel," recognized the "work of so many people," Snowden said.

In his speech on Monday, the former CIA employee acknowledged that journalists, publishers and activists were among those who had put themselves in danger and could not go home because they feared arrest, just like he did.

"These are things that are unlikely to change soon. But they're worth it…All the prices we paid, all the sacrifices we made, I believe we'd do it again," Snowden said, calling upon the United Nations to propose new measures that would help secure the rights of individuals and the rights of all human beings.

Snowden was named an honorary award-winner alongside Alan Rusbridger, editor of the British newspaper, Guardian, which published several reports based on documents leaked by the CIA analyst. As honorary winners, Snowden and Rusbridge did not receive any prize money.

Three other prominent activists were awarded with nearly 70,000 dollars for their contributions to society. These included Pakistani human rights activist Asma Jahangir, Basil Fernando of the Asian Human Rights Commission and US environmentalist Bill McKibben.

Coincidentally, Glenn Greenwald, who played an important role in getting Snowden's documents published, was honored with the Geschwister Scholl prize in Germany for his book "No place to hide." The bestseller documents Greenwald's meetings with Snowden and the global consequences of the US' surveillance program.

Edward Snowden, the US whistleblower who is living in exile after leaking NSA files in 2013, says he and his wife are applying for Russian citizenship. The two US nationals want to avoid separation from their child.