Albanian opposition parliamentarians have protested against the interim appointment of a chief prosecutor by the ruling party. But their smoke-bomb tactics were unable to prevent her being elected. 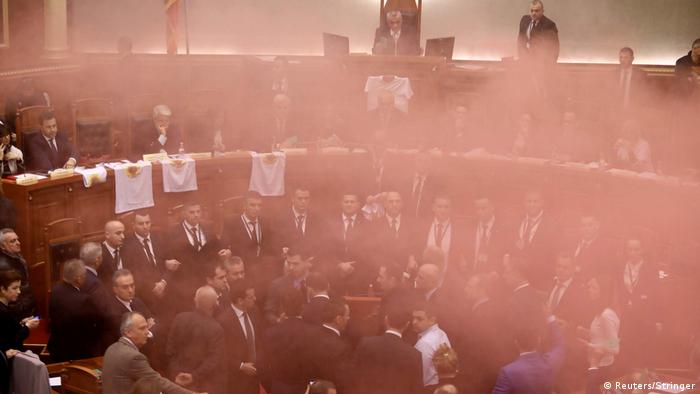 Albanian opposition lawmakers threw smoke bombs in parliament Monday to protest the election of a temporary prosecutor general by the ruling socialists.

Despite the smoke-filled chamber, the vote still took place to elect Arta Marku as the acting chief prosecutor, with the Socialist Party backing her to the tune of 69 votes. Two parliamentarians voted against him and two others abstained. The rest of the lawmakers in the 140-seat chamber boycotted the vote.

Marku's swift swearing-in ceremony after the vote was still shrouded in a cloud of smoke. 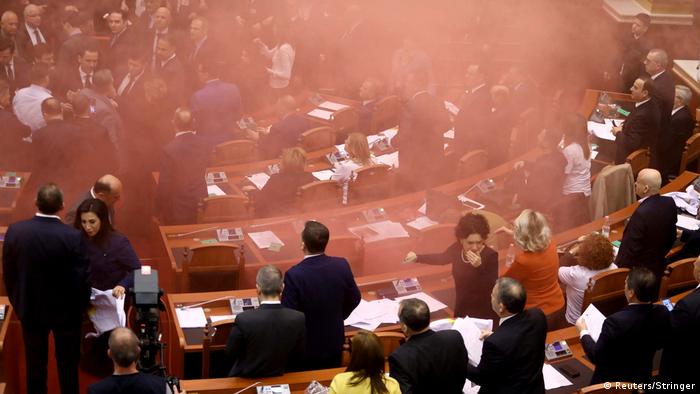 The vote went ahead despite the smoke wafting through the chamber

Outside the parliament, about 3,000 protesters waving EU and US flags shouted anti-government slogans and condemned Marku's appointment, which they called unconstitutional.

At one point, the crowd broke through the security line before the building but riot police pushed it back. The protesters persisted, also throwing smoke bombs at police. Local media claim several people were hurt in the melee. 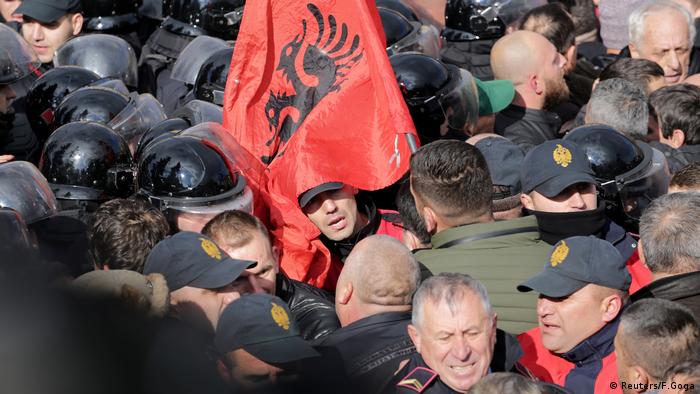 Police scuffled with protesters outside the parliament

The opposition, which includes the conservative Democratic Party and the center-left Socialist Movement for Integration, claims parliament is not entitled to elect an interim prosecutor general and should wait for the creation of a commission to do that.

Taulant Balla, the head of the parliamentary party of the Socialists, said the commission would be created in a few weeks but "such an important institution as the prosecutor general's office cannot remain vacant even for a day."

EU and US giving a legal hand

The ruling Socialist Party said its decision to elect an interim prosecutor general was based on an interpretation of the country's constitution that they requested and received from EU and US legal assistance missions in Albania.

Both the European Union and the United States back the appointment of an interim prosecutor. They have helped Albania draft judicial reforms that are needed if the country hopes to eventually become an EU member.

Lulzim Basha, the leader of the Democratic Party, however, slammed Prime Minister Edi Rama for wanting to appoint a "puppet" to follow his commands. 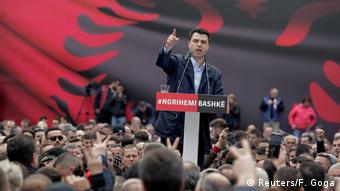 Basha: Government has chosen a puppet

"This is the beginning of the popular uprising," Basha said before ending the protest but without explaining how it would continue.

His party colleague Sali Berisha, who is both an ex-president and ex-prime minister, called for the "extermination of the lawmakers' mandates, which means no lawmaker will be a lawmaker anymore." But he didn't clarify how that might be done or what it would mean in practice.

Judicial corruption has plagued Albania throughout its post-communist era, stretching back to the early 1990s. But a reform program approved last year aims to root out bribery and ensure that judges and prosecutors are free from political influence.

Judges' personal and professional backgrounds are now being vetted in a recently introduced procedure.

Read more: Albanians go to the polls with eye on EU