Slovenia: Trapped in the spirit of the past after 30 years of independence? | Europe | News and current affairs from around the continent | DW | 24.06.2021

Slovenia: Trapped in the spirit of the past after 30 years of independence?

In 1991, Slovenia broke away from what was then Yugoslavia. On June 25, the nation celebrates 30 years of independence. But how happy are Slovenians with the status quo? 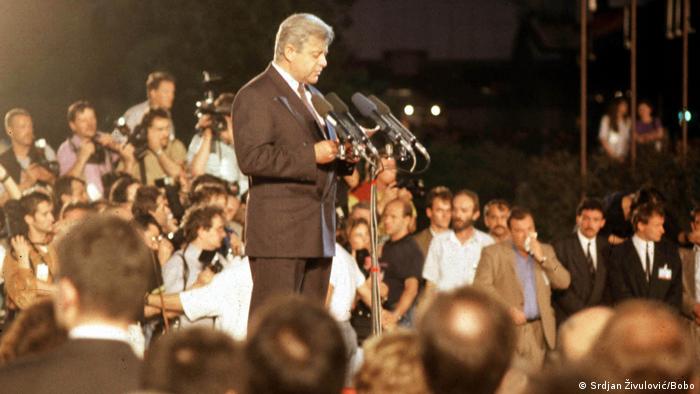 Kucan addresses Slovenians on the new nation's independence efforts in 1991

"Dreams are allowed today, tomorrow is a new day" are words etched into the historical memory of Slovenians, also known as Slovenes. On June 25, 1991, they were uttered by Milan Kucan, then president of the Yugoslav Socialistic Republic of Slovenia and subsequently twice president of independent Slovenia. On that day, Slovenia declared its independence and officially separated from Yugoslavia.

"You could sense his uncertainty from that last sentence," says Dusan Plut, then a member of Slovenia's presidency and president of the Greens of Slovenia. He had high expectations but as a politician he was also concerned about how independence would pan out.

Following a referendum held on December 23, 1990, in which 95% voted in favor of Slovenian independence, the country's politicians unanimously decided to implement the outcome as soon as possible — "non-violently," as Plut emphasizes.

Plut's disappointment with the stance of European policy and key European countries at the time, including Germany, is still tangible: "Back then, we did not get any support. In an attempt to prevent conflict, the emphasis at a European and international level was on preserving both border integrity and even the socialist sociopolitical system of Yugoslavia. Yet war occurred nevertheless." 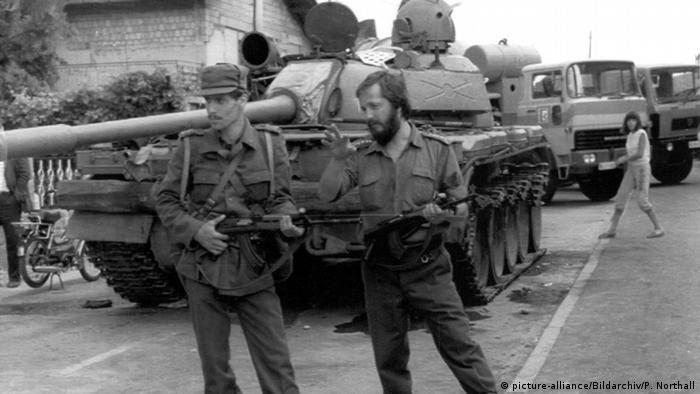 After 95% of Slovenians voted for independence, the new nation's path was clear

Following Slovenia's proclamation of independence, the Yugoslav army moved to intervene. Sociologist and philosopher Renata Salecl recalls that there was widespread fear of military escalation. However, the war in Slovenia only lasted 10 days.

The last Yugoslav soldiers left Slovenia on October 25, 1991 by ship from Koper. The fighting claimed between 67 and 76 casualties: 19 on the Slovenian side, 45 on the Yugoslav side and 12 foreign nationals, among them the Austrian journalists Nikolas Vogel and Norbert Werner.

"The decision for an independent and sovereign Slovenia was appropriate and correct. We used 'the last chance' to achieve an independent Slovenia," explains Plut, while admitting that "the very achievements of independence evoke mixed feelings." 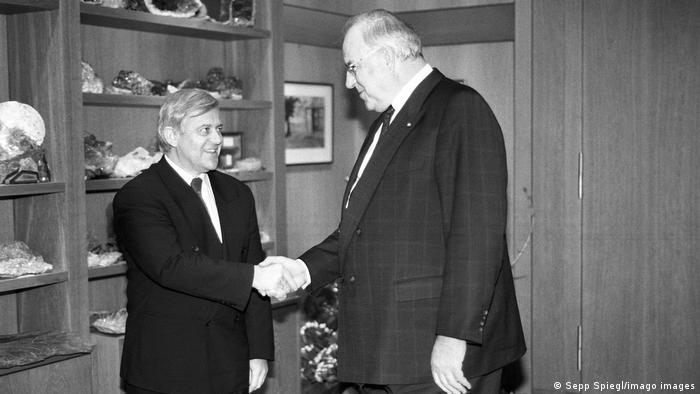 Naturally there has been an increase in material well-being since Salecl adds that, back then, there was a great deal of faith in democracy and human rights. "But there was too little discussion about what kind of society we envisioned for the future."

"Social and regional disparities have increased. Decisions are still taken centrally. The shameful legacy of independence is that some 15% of the population lives below the social security threshold. This is totally at odds with the political aims and promises of the early '90s. Independence was not meant to mean that a relatively high proportion of Slovenes lives in poor circumstances," says Plut.

"We began well, but of course we made mistakes," says Natasa Briski, a journalist at web portal Metina lista and a former US correspondent. She points out that on February 26, 1992 Slovenia's Interior Ministry illegally erased 25,671 people with Yugoslav citizenship from the register of permanent residents. 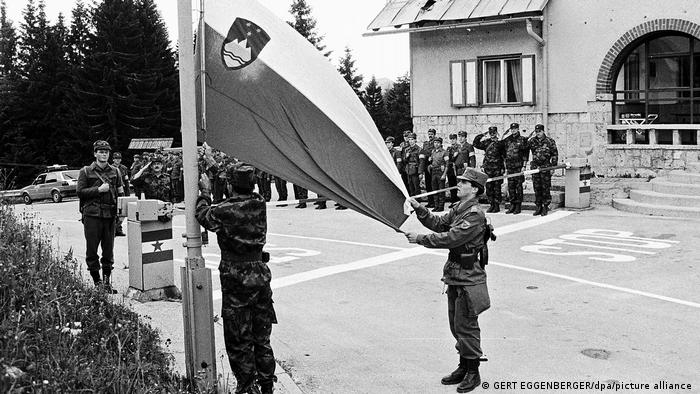 Briski, who was 16 years old at the time of independence, experienced a Slovenia that was bold, ambitious and connected. However, after achieving membership in relevant international organizations such as the the Organization for Economic Cooperation and Development, the European Union and NATO, the fledgling state began to drift.

"Part of the problem is that the reins of power in Slovenia are still held by people who played an important role 30 years ago, but today they are mostly just bitter, old and lack vision. Over the last 10 years our political game has really deteriorated," she says.

Press freedom under threat in Slovenia

A Vox populi opinion poll, prepared for newspapers Dnevnik and Vecer by the Ninamedia agency (n = 700) revealed that 61.8% of respondents felt Slovenia had not lived up to the expectations of citizens over the last 30 years.

Yet, in terms of natural and human potential, Slovenia ranks among the 20 to 30 most privileged countries in the world, argues Dusan Plut. One of the key challenges of the future for Slovenia is ensuring social security. "The current mechanisms will not work. Slovenia needs to thoroughly consider new social security mechanisms, such as the idea of a universal basic income."

A lecturer in electrical engineering at the University of Slovenia in Ljubljana, Emilija Stojmenova Duh estimates that Slovenia scores below the European average in the field of digital transformation.

"The key problem is a misunderstanding of digitalization and its very patchy implementation. The biggest challenge we have, in addition to the connectivity that should be available to everyone, is providing the skills and digital knowledge essential for digital transformation. Too many Slovenes are digitally illiterate and therefore unable to use either the Internet or digital public services," she says.

Emilija Stojmenova Duh moved to Slovenia from Macedonia in 2002. "Politically and socially, Slovenia is currently at rock bottom. Intolerance is rife, although fortunately this tends to be more evident in politics and less so in society at large. That said, I fear intolerance in politics could lead to hatred and unrest among the population," she says.

March 2021 saw the Culture Ministry adopt a decision to establish a museum of Slovenian independence. "More and more monuments are being set up in a move to mythologize Slovenia's independence — increasingly, the emphasis is on glorifying those aspects of the process directly associated with today's principal party of government," says Plut.

What chance democracy and human rights?

Renata Salecl still remembers attending protests in 1988 in support of today's Prime Minister Janez Jansa, who, along with three other colleagues, was arrested by the state security service and the Yugoslav People's Army's counterintelligence service for allegedly divulging military secrets. The "trial of the Ljubljana Four" was what triggered the mass protests that led to Slovenes discovering the meaning of civil society. 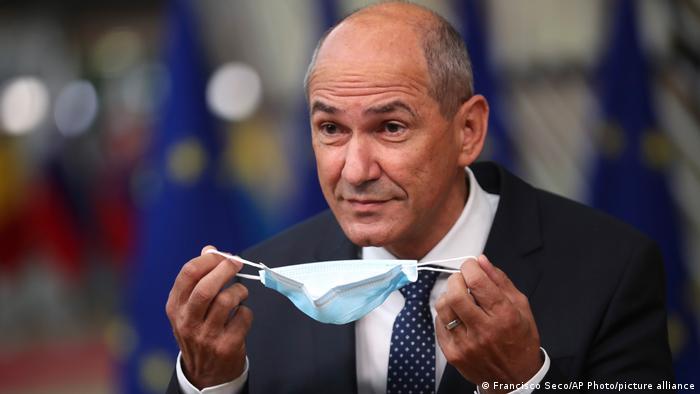 "Now the pendulum seems to be swinging back in an authoritarian direction again," says Salecl. "We fought for the rights of the man who is prime minister today. Today, however, Jansa is riding roughshod over concepts such as human rights, democracy, freedom of assembly and the like. The ruling politicians in Slovenia are increasingly turning away from democracy and human rights — values I had always associated with independence."

Natasa Briski claims Slovenia is at an important turning point today. "Our future will depend on how events unfold over the next few years. We will have to decide what we want — a fresh, innovative, daring and socially just Slovenia, or a country trapped in the spirit of the past for the next 30 years."

Who owns this sea, Slovenia or Croatia?

The landmark peace agreement was worthy of applause 25 years ago. But now, politicians in Bosnia-Herzegovina need to set aside personal interests and reckon with the country’s war-torn past.

The war that destroyed Yugoslavia began on June 26, 1991. Today, a number of multiethnic states face the same challenges that led to its disintegration.