Sisterhoods Make a Comeback in Germany

For centuries, beguine communities devoted themselves to a life of prayer and charitable work. Germany has seen a renaissance in these lay sisterhoods in recent years. Most are adapting traditions to meet modern needs. 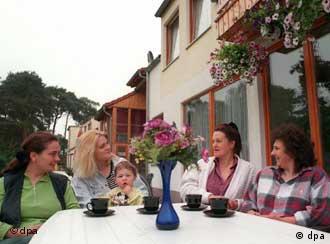 Today the community reaches out to single mothers and older women

Beguines were founded in the Netherlands in the Middle Ages, spreading to France and Germany up until the beginning of the 20th century. Groups of women founded these lay sisterhoods, which followed an austere life without the religious vows of a nun.

Today, there are some 25 beguine communities in Germany, like in the western German town of Schwerte. This beguine group defines itself as strongly secular. Co-founder Lore Seifert said they want to help women today find a suitable way to deal with their lives.

This was also the case in the Middle Ages. At that time, women had a worse position in families, especially if they were unmarried.

"They didn't want to enter a convent, perhaps because they didn't want to live by those rules," said Seifert. "These women discovered the beguine way of life, which was independent and they could fend for themselves. They could determine what had to be done in their lives."

An old solution to modern-day problems

Over the centuries, beguines were usually unmarried women or widows. They lived in convent-like housing communities, known as béguinages, and followed a tradition of doing predominantly charitable work.

This is often still the case today, although these communities have become more of a response to women's modern-day situation.

"There are a lot of women living alone, women getting older and single mothers," said Seifert. "We're trying to find an overall living form to bring these women together." 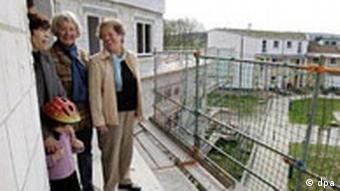 The béguinage in Schwerte was designed by the women living there

Thirteen women with five children live in the Schwerte community, an ecologically designed building. Single mother Corinna Wunderling, 43, is one of them. She said she has already learned "endlessly" from the collective experiences and knowledge of the older women in the community.

"I hope that my son and I myself learn a lot about other concepts of living by being here," said Wunderling. "The isolation disappears and we're no longer just focused on each other."

Kindred spirits who help others

Every woman in the beguine community has a good reason for being there. Some have lost their partners; others were simply tired of battling for time with their friends who had families of their own. Beguines want to be with kindred spirits, who support each other. 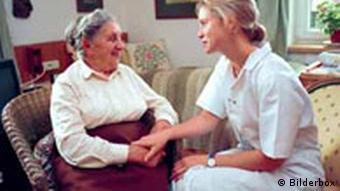 Beguines are very active in taking care of the elderly

But beguines also look out for more than just their own welfare. They take on responsibilities outside of their communities, for example by working in hospices, helping migrant children with their homework or taking care of women who have been victims of violence.

In Schwerte, the beguines live in an environmentally-friendly manner. They show their solidarity with the developing world by buying fair trade products. But they have also sought contact to their neighborhood to find out what benefits it hopes to gain from the beguine project. There have been requests for child care and some women already look after older people or those in need of care.

Although the Schwerte group considers itself secular, beguine Irmtraud Ruder-Schnelle said she and her sisterhood do live a life of piety.

"The way we live, sustainable and environmentally conscious, is something very significant," said Ruder-Schnelle. "Or the way we deal with each other: I think it is a form of spirituality."

The beguine community for the western German cities of Essen and Werne is the most closely tied to its historic model. These women, who do not live in a béguinage, meet on a regular basis to pray.

"We're dreaming about a spiritual center for beguines in Germany, which already exist in Switzerland and Austria," said Brita Lieb, who co-ordinates the group. The 60-year-old, who is actually Protestant, found her spiritual life in the Catholic Church following her divorce and several years as a single mother. She calls herself a secular sister in the congregation of holy hearts. 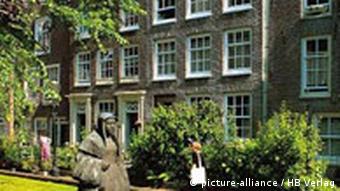 This béguinage in Amsterdam is one of the oldest in Europe

"We have found a true form of women's solidarity and we won't allow ourselves to be divided," said Lieb.

80-year-old Gertrud Hofmann co-founded this group 20 years ago -- as a makeshift solution. No religious order would consecrate the 60-year-old widow at that time. But the more Hofmann dealt with the beguine tradition, the more excited she was about it.

"With us religious beguines, there are all forms of Christian charity, with a focus on women," said Hofmann. "There's a group that visits people who have no one else. There's another group that takes of care of elder sick persons. There are countless examples of our work."

In the Middle Ages, the sick and needy were considered punished by God. According to Hofmann, beguines molded social history by taking care of these groups.

"The beguines were the first to really take care of the ill, who made sure they had clean bedding and treated them like Christ himself," said Hofmann. "This changed nursing traditions and the way the sick were viewed."

A diverse community of women

In the over 700 years of their existence, beguines have taken on a variety of activities and ways of life. Their commitment to this gave them a certain independence refused other women.

Payment for their handicrafts, nursing, hospice work, teaching and prayer made them economically independent. They were in part highly regarded in society as chaste and spiritual women. At the same time, they had the freedom to leave the beguine community without any damage if they decided to marry.

Today, many beguine communities are made up of predominantly Protestant women, who critically deal with religious dogmas and beliefs from a feminist perspective.

Their activities are as diverse as their members. In the eastern German state of Thuringia, beguines operate an ecological farm with a guesthouse. In the southern German university town of Tübingen, beguines support single mothers. And in Cologne and Rostock, they focus on cultural activities and promoting women.

Members of Germany older generation are looking at new models of living for their retirement years. They want security, comfort and social contacts; they don’t want a nursing home. Senior flat shares fit that bill. (May 4, 2005)