Singapore copes with record-high elderly suicide rate | Asia| An in-depth look at news from across the continent | DW | 15.08.2018

In 2017, Singapore recorded its highest-ever number of suicides among people aged over 60. DW spoke with a suicide prevention specialist about what is causing this alarming trend and how the community is taking action. 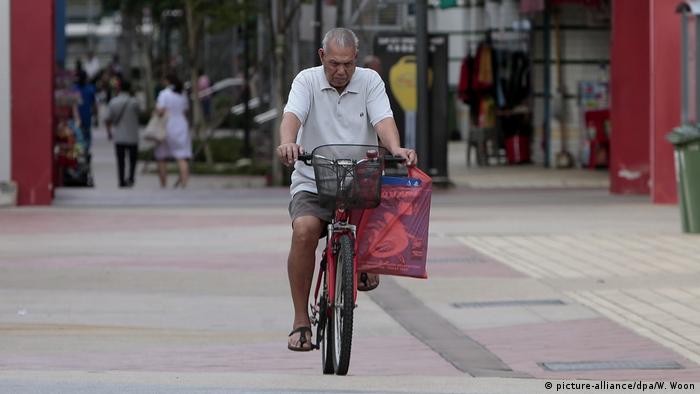 In 2017, the number of elderly people committing suicide in Singapore reached a record high, with 129 people over 60 taking their own lives.

The suicide prevention organization, Samaritans of Singapore (SOS), emphasizes that as Singapore's population ages, there must be more focus on providing a better quality of life for senior citizens. According to official projections, the number of people in the city-state aged 65 and above will nearly double by 2030.

Elderly in Singapore face problems such as lack of social contact with friends and family, physical impairment and fear of becoming a burden on others.

In an interview with DW, the executive director of SOS, Christine Wong, spoke about the causes behind the increase in elderly suicide in Singapore, and what can be done to address the issue.

DW: How does the 2017 suicide rate in Singapore compare to other years?

While total deaths by suicide were at a 5-year low of 361 in 2017, the number of people aged 60 and above who took their own lives in 2017 has risen to 129 — the highest number ever recorded. The high prevalence of suicide among the elderly is a worrying trend in Singapore.

If the total suicide rate in Singapore has dropped, why has it spiked among the elderly? 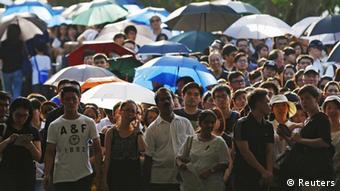 The drop in deaths by suicide may be attributed to the concerted efforts of social and community services, including members of the public who are aware of suicide prevention work at SOS.

SOS actively educates the public on suicide warning signs and equips them with knowledge of resources available in the community, with which they can seek help when they face a crisis.

Also, we emphasize the important role of the community and an individual's social support group in helping someone through a low period.

However, the elderly may be unaware of the resources available despite our outreach efforts. When the elderly are less aware of available resources, they may feel a strong sense of helplessness, which may exacerbate social isolation.

Singapore has an aging population and smaller family sizes. Globalization also has an effect, with many Singaporeans traveling abroad to work and eventually settling in different parts of the world, leaving the elderly alone.

Statistics indicate and confirm the fact that there are a growing number of seniors living alone.

How are social services addressing this problem?

SOS is the only suicide prevention agency in Singapore dedicated to providing confidential emotional support to individuals facing a crisis, thinking about suicide or affected by suicide.

Suicide prevention work requires a collective effort. Therefore, SOS collaborates with other social service organizations and community partners. We share resources and exchange knowledge to improve service quality standards and to ensure that more services are made available.

What can your agency do to improve the elderly suicide problem?

Apart from reaching out to the elderly community with other agencies, we have to continue educating loved ones and caregivers about the importance of mental wellness among the elderly in a more effective manner. We need to increase awareness and detection, and help erode some of the stigmas they hold.

Read more: World Suicide Prevention Day: fighting taboo to talk about one of our worst killers

Sometimes, when people are stressed, they don't want to talk to other people. How can your institution help them?

This is why educating and creating awareness about seeking help is crucial. It is important to understand that everyone has problems or stress and it is okay to talk with family or friends or to call SOS or other agencies.

Often callers in crisis may not have anyone in their social circle to share their problems with. When these struggles build up in an individual, it may reach a point where it gets too overwhelming and people cannot cope, which leads to suicide ideation.

At SOS, we provide confidential emotional support. This helps break the barriers against seeking help, as clients can leave behind the baggage of their pride and shame when they reach out to us.

Christine Wong is the executive directior of Samaritans of Singapore, a suicide prevention organization.