Sigmar Gabriel: Losing his way to the top

With his SPD poised to enter a grand coalition government with Germany's conservatives, Sigmar Gabriel is set to become a powerful man. But his potential role under Angela Merkel remains anything but clear. 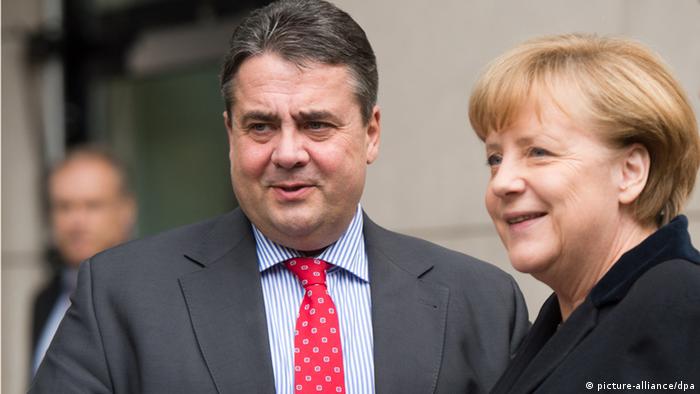 Sigmar Gabriel has climbed to the top tier of German politics. It will soon be decided whether he will become vice chancellor of the country, a surprising turn for someone who was once an oft-ridiculed Social Democratic Party (SPD) representative for youth and whose responsibility for popular music earned him the nickname "Siggi Pop."

But today the provincial politician from Lower Saxony is one of the most influential men in Germany. He has headed the SPD since 2009, displaying political savvy and a lot of energy - and sometimes impatience. Time and again, he has succeeded in inspiring its members despite internal divisions and declining numbers, creating unity among the ranks.

After the party's election debacle of 2009, when it slumped from 34 to 23 percent of the vote, the former environment minister roused his disappointed and frustrated colleagues with a defiant speech at the party conference in Dresden. "We have to get out into life," he told the downcast SPD members. "We have to go where there is hard work. Because only there, is there life." 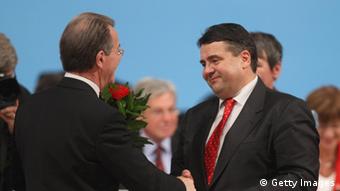 Bolstered by the delegates' vote of confidence as they chose him to lead the party, succeeding Franz Müntefering, he promised to lead the SPD back to power. But first, the party went into opposition for four years.

During this time Gabriel pushed through internal party reforms. He abolished the party steering committee in favor of an expanded executive committee and led the regular party conventions, the most important meetings for the party. He threw his weight around, particularly in the aftermath of the general election in September, when he spoke in favor of coalition negotiations with the conservatives. But Gabriel said he would leave the final decision to party members on whether to enter into a Merkel government.

Back at the top

The SPD chief was confirmed in his post shortly after the September 2013 election. But this time the result was underwhelming. Only 83.6 percent of the approximately 600 delegates voted for him, eight percentage points less than in his previous re-election in 2011. Gabriel thanked them for the "honest result." 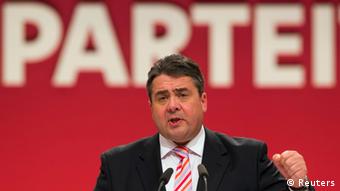 It had followed a sober and rigorous assessment of the situation he had presented to the party congress. Looking at the election results, there was nothing to gloss over, he said: "I bear overall political responsibility for our election result."

The SPD had suffered from a lack of credibility, Gabriel said. For people in Germany, the stable economic situation was more important than the social democratic ideal of justice. The SPD therefore needed a stronger economic profile, he said - but simply having a candidate for chancellor who embodied this would not be enough to win elections.

Indeed, the September 2013 election was the SPD's second-worst result ever. Only 25.7 percent of voters gave the party their vote. Critics said Gabriel had hurt the chances of chancellor candidate Peer Steinbrück chances through unfortunate remarks and uncoordinated proposals.

For example, in the middle of the election campaign, he talked about introducing a general speed limit on German autobahns, but quickly beat a sheepish retreat when the foreseeable protests erupted. He had even spread doubt about Steinbrück's suitability, threatening to turn his candidacy into a fiasco.

Such dissonance was not to be heard at the recent party congress in Leipzig. Gabriel said his friendship with Steinbrück hadn't been hurt by the election campaign. Addressing the failed candidate for chancellor, he added, "You're simply a great guy."

This conciliatory tone won Gabriel public sympathy. Despite his abrasive manner, he had risen to the ranks of the most popular politicians, even though journalists often found him impatient and irritable. In a TV interview a few weeks ago he responded testily to questions about the SPD's membership ballot, accusing host Marietta Slomka of spreading "nonsense." He got support from an unexpected source: CSU leader Horst Seehofer lodged a complaint about the manner in which Slomka questioned the constitutionality of the vote. 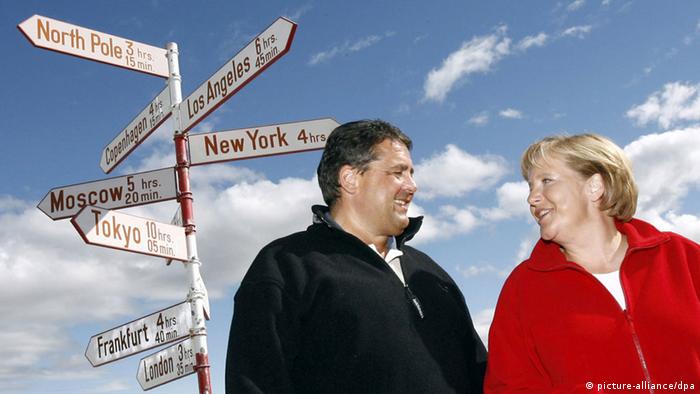 Gabriel has already served as a minister under Merkel

By seeking SPD members' approval for the coalition agreement, Gabriel has placed his party in a dilemma. A government coalition with the conservatives is extremely unpopular among them. The memory of the last grand coalition, between 2005 and 2009, is still fresh in their minds - as is the plunge in voter support for the SPD it brought. The vote is also a gamble for Gabriel himself. A 'No' could end his career.

It is still unclear what role he could play himself in a grand coalition. The two most important positions beside the chancellorship - the foreign and finance ministers - appear to have been filled already. One possibility is a new ministry in charge of the economy and energy. In this position, Gabriel would be vice chancellor at Merkel's side.

But he could also forgo a cabinet post and instead assume the parliamentary party leadership. This would have the benefit that he would not be as enfettered by cabinet discipline and would therefore be free to lead the next election campaign. He could then go for the big prize: the office of chancellor.

If Germany's future federal government is made up of the country's two largest political groups, it won't receive much support from younger party members. They oppose the grand coalition alliance for several reasons. (12.12.2013)

Political scientist and SPD party member Stefan Schieren tells DW why the Social Democrats' decision to allow party members to vote on the coalition agreement could also spell "disaster for the SPD." (27.11.2013)

It took a long time, but the coalition agreement includes a bit of what all parties involved wanted. They can now all call the agreement their own, even if they have to admit some defeats. (27.11.2013)