Sierra Leone 'Peace Diamond' undersells for over $6 million at auction

A Christian pastor had given away the more than 709-carat diamond so the government could fund local development projects. Officials hope its sale will also help combat illicit smuggling in the modern industry. 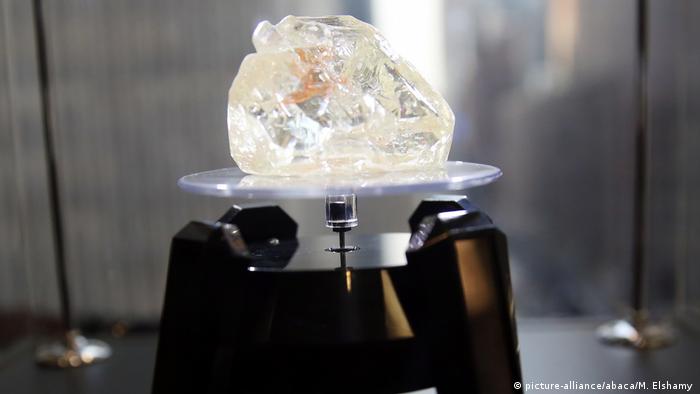 Sierra Leone sold one of the world's largest diamonds at an auction in New York on Monday, fetching a lower-than-expected price of $6.5 million (€5.5 million).

The egg-sized, 709-carat "Peace Diamond" is one of the largest ever discovered in Sierra Leone and between the 10th and 15th largest ever found.

The international diamond trading network that handled the auction, the Rapaport Group, said the stone had gone to British billionaire and jeweler, Laurence Graff.

Cacao as a conservation tool

The stone was dubbed "Peace Diamond" after the Christian pastor who found it gave it away in the hope it would allow the government of Sierra Leone to raise money for local development projects.

The government said Monday it will use the $3.9 million in tax revenue from the sale to fund clean water, electricity, schools, health centers and roads.

"Peace diamond" plays on the term "blood diamond," which were diamonds rebel groups sold during Sierra Leone's brutal civil war in the 1990s to buy arms and ammunition. In many cases, groups used slave labor to mine the stones.

The UN enacted a ban on all diamond exports from the country until 2003, but illicit smuggling continues to mark the modern diamond trade.

The government had expected the stone, the first ever to be sold at a public auction, to fetch $7 million.

Senior officials were nonetheless optimistic about the sale's effects on the illicit diamond trade in Sierra Leone.

"It will encourage all the diggers back home," said Chief Paul Ngaba Saquee, head of Sierra Leone's eastern Kono district where the diamond was found.

"Instead of being ripped off in some dark corners when they find their diamonds, that they will bring it and put it on the table in front of the government," he said, adding: "Maybe this is going to be the beginning of a new day in Sierra Leone."