Sieren′s China: High tech to track the coronavirus pandemic | Germany | News and in-depth reporting from Berlin and beyond | DW | 02.04.2020 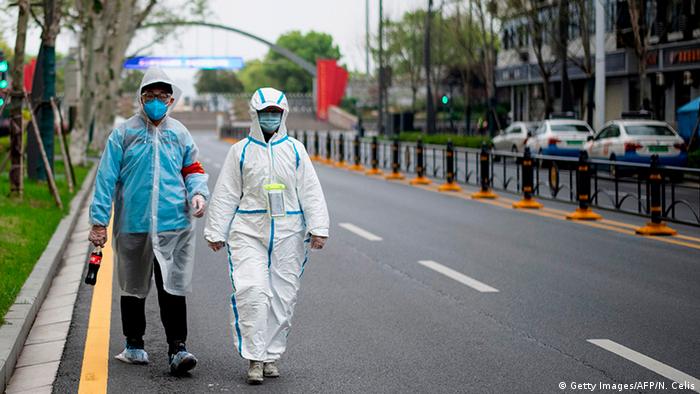 Health apps have become a crucial element of China's race to prevent a second wave of COVID-19 infections. Users scan QR codes to share information about their health status and travel history. The apps can trace whether users have been in contact with infected people. Users now have to scan their codes before boarding buses and trains or entering airports, offices and even their own housing complexes.

The most famous health app was developed by the tech giant Alibaba in conjunction with the Chinese authorities. Other companies have also developed similar software, however. It was possible to work swiftly because the Chinese state already has access regarding citizens' movements and programmers did not have to worry about data protection laws. People in China use the technology to expedite a return to business as usual and be certain that they are not infected.

It makes more sense if people volunteer to use the apps rather than being forced to by the government. This was already the case when digital payment systems were introduced. The more people used them, the more others were convinced and then skeptics did not have much of a choice as the technology had already become ubiquitous.

A mobile app that tracks exposure to the virus has already been put to good use in Singapore, where the infection rate has been relatively low. Furthermore, those using the app often feel they are doing good by protecting society from another outbreak.

In China, people hope that authorities will not oppose a voluntary early-warning system. After all, people remember that at the start of the coronavirus crisis the authorities gagged doctors and others trying to warn others of the outbreak, even if they were later obliged to apologize.

Similar technology has proved successful in Taiwan and South Korea, which introduced monitoring systems early on to track people who had come into contact with infected people and isolate them if necessary. So far, the two countries have been able to keep the virus under control. The World Health Organization has confirmed that the technology helped when the respective governments decided implement quarantine measures. The German virologist Christian Drosten, who has been acting as advisor to the German government, has also said that he thinks it makes sense to use such tracking technology in the early stage of the virus in particular.

There are many who hope that Germany will soon be using such an app. The Health Ministry and researchers at the Robert Koch Institute are developing similar software. The idea is to introduce a noncompulsory app that will not be able to detect who met whom and where but will be able to identify if a phone user was in close contact with another infected user.

The app will only really be able to function if 60 percent of the population uses it. In Germany, it won't be as easy as in Asia to reach such a percentage.

Read more: How to make sense of coronavirus numbers and terminology

Half of the respondents to a recent poll said they would not oppose an app to help warn users who had come into contact with someone infected with COVID-19. That will not be enough to convince politicians to use the app.

An app currently receiving much attention uses Bluetooth to track which users have come into close enough contact with each other to transmit the virus. The app does not register where this happened but measures the distance between two devices. The idea is to convince people to use the app without fear of having their data protection rights violated.

Some people might choose not to use the app to avoid the feeling that they are being surveilled or have helped to limit the freedom of movement of others. People who have already lost their jobs or are scared of losing them and their livelihoods might be more inclined to use such an app.

In Germany, the risk is much lower than in China that the state will end up storing information that it shouldn't.