A smoking ban will be introduced in Beijing next June. That's all well and good, but extending it beyond the city limits will be a different story, says DW columnist Frank Sieren. 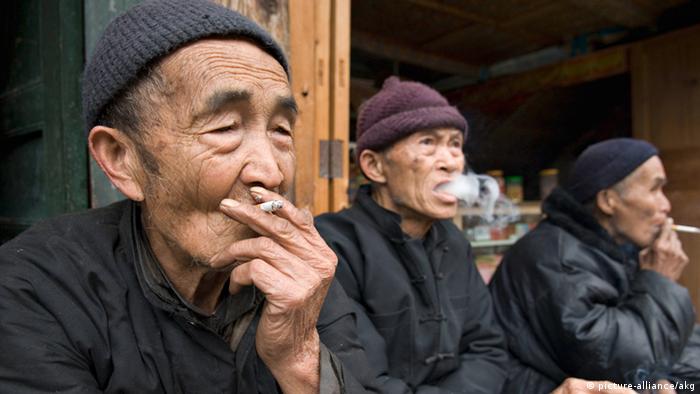 Only a few days ago, everyone was in agreement that the rise of Chinese President Xi Jinping is inexorable. His determined anti-graft campaign has been admired on both the domestic and the international stages. He comes across like a leader who shrinks from nothing; a hero of the common people, the people who feel completely at the mercy of corrupt cadres.

But even though Xi just had one of the country's most powerful figures arrested, his next target is a daunting one: The common people themselves - or, to be precise, their smoking habits.

A new law proposed this week foresees banning smoking in Beijing's public buildings, such as hospitals and child care centers. Buses and offices are also set to become smoke-free. Anyone who defies the ban faces a fine of more than 70 euros - as does any owner of a building who fails to enforce the ban.

This is the second time that lawmakers have attempted to introduce a smoking ban. The first was three years ago and amounted to little. All that remains of it are a few no-smoking signs here and then, an ashtray seldom far away. No one can remember which were there first: the signs or the ashtrays. Either way, nothing has changed, and the people of Beijing remain ardent smokers.

But now the tobacco industry is also under pressure. Beijing also wants tobacco advertising to be banned - from the sides of buildings, TV and newspapers and magazines. A year ago, Xi announced he would be getting tough on the nation's smoking habits, even making his wife an anti-smoking ambassador. The nation's smokers were unimpressed.

Perhaps it's therefore just as well that China has a new anti-smoking ambassador: Bill Gates. The Microsoft founder is appearing in advertisements calling on people to take a stand against passive smoke. It's the sort of message that might go down well in the West, but might well fall on deaf ears in China.

These days, China is home to over 350 million smokers - more than in the United States - and the numbers are continuing to rise. Then there are the country's 760 million passive smokers. Over a million people die every year in China as a result of smoking. One third of the world's lung cancer patients are Chinese.

Xi is starting his campaign in Beijing, home to 4 million smokers, before taking it to the rest of the country. But it remains to be seen if he'll really pull out all the stops. What happens in the capital will prove decisive.

If it works anywhere, the campaign will work in Beijing. At this stage, there is little point in taking it to rural areas. "First Beijing neglects the hinterlands, then tells everyone there they can't smoke," would likely be the reaction. Farmers would take to the barricades. Out in the country, gifts of cigarettes and alcohol are still the main ways business partners demonstrate their appreciation and goodwill - as the government in Beijing must surely be aware, given that until earlier this year, the same practice was widespread amongst party cadres. Now, however, it is banned.

The tobacco industry, has retaliated by releasing figures showing how many jobs would be lost if the Chinese cut back on smoking. Around 60 million people in China earn their living producing and selling cigarettes. The Finance Ministry added its two cents, pointing out that smoking is epidemic in China because cigarettes are so cheap, which is a result of one of the world's lowest tobacco tax rates. Even so, cigarettes account for nearly one tenth of annual state revenue.

What with a tobacco industry that opposes higher taxes and a rural population reluctant to break its bad habits, Xi Jinping is up against two powerful foes. Perhaps in future, anyone with an ID showing they come from the countryside will be allowed to light up, while the urban population will be forced to quit. Either way, residents of Beijing still have another few months to enjoy their vice - the new law does not come into effect until June.