Showdown looms for Beijing and Hong Kong | News and current affairs from Germany and around the world | DW | 01.02.2015

The gulf between the Chinese Communist Party and pro-democracy activists in Hong Kong has grown increasingly wide. As they did last year, the two camps and their opposing ideologies are likely to clash again. 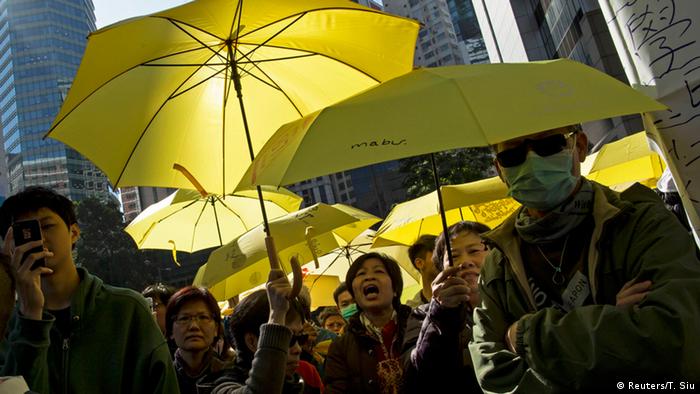 Four months ago, the Occupy Central crusade - also known as the Umbrella Movement - exposed to the world the shocking frailty of the "one country two systems" model.

Occupy Central was a reaction against the Xi Jinping leadership's efforts to tighten control over the Hong Kong, despite guarantees that the Special Administration Region (SAR) enjoys a high degree of autonomy apart from foreign and defense issues.

A "White Paper on the Practice of the 'One Country, Two Systems' Policy" issued last June by the central government emphasized that Beijing has "complete jurisdiction" over Hong Kong and that all of the SAR's administrators - including judges- should demonstrate "patriotism" toward the socialist motherland. The document also warned against "a small minority of Hong Kong people colluding with outside forces to interfere in China's domestic affairs."

Then, on August 31st, the National People's Congress, China's legislature, laid down a Draconian formula for supposedly universal-suffrage elections of Hong Kong's Chief Executive (CE) in 2017. Aspirants to the position, which is equivalent to Hong Kong mayor, can only become legal candidates after securing at least 50 percent of the support of a "nomination committee" that is expected to be made up of pro-Beijing, pro-establishment figures in the Hong Kong community.

Not surprisingly, the main slogan of Occupy Central was "We want genuine elections," meaning polls that tally with global norms - and not "Chinese-style elections" whereby the results are known even before the ballots are cast. 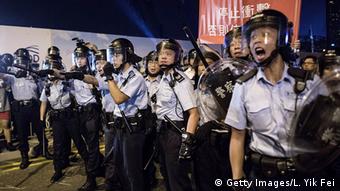 At least from the Chinese perspective, Occupy Central has confirmed suspicions that, in the words of the state media, "troublemakers" in Hong Kong are in cahoots with "anti-China foreign forces" - a code word for the United States government - to undermine Chinese Communist Party (CCP) rule. Vice-Premier Wang Yang, who is also a Politburo member, characterized the Umbrella Movement as a "color revolution," a reference to uprisings in countries such as Georgia, Ukraine and Kyrgyzstan in the 2000s. Incumbent CE Leung Chun-Ying, who is deemed by pro-democracy legislators as a "Beijing stooge," has repeatedly asserted that Occupy Central activists had received covert support from "hostile foreign forces."

The following developments in China-Hong Kong relations are feared likely to happen after the 79-day Umbrella Movement:

●Until last year, Beijing's goal in Hong Kong was mostly related to "upholding stability and prosperity of the SAR." Henceforward, the CCP leadership will put more emphasis on preventing "anti-China elements" in Hong Kong from threatening China's national security.

●Beijing's mission in Hong Kong, known as the Central Liaison Office (CLO) will try harder to ensure that more pro-Beijing politicians will win seats on Hong Kong's Legislative Council and other representative bodies.

●More attempts will be made to influence Hong Kong's media, most of which are already exercising self-censorship if not toeing the line laid down by Beijing. This is partly due to the fact that most owners of newspapers and TV stations in Hong Kong have huge investments in the mainland - and they do not want to run afoul of the CCP.

●The number of mainland-Chinese police and state-security officers who are based in Hong Kong will increase. There have been reports of agents from Beijing's Ministry of State Security taking part in the surveillance of pro-democracy figures, including founders of Occupy Central and student leaders. Pro-Beijing politicians have talked about enacting a harsh anti-sedition law that could be used to silence pro-democracy activists.

●The Leung administration has vowed to promote "patriotic education" in Hong Kong schools. More exchange programs between Hong Kong and mainland-Chinese schools are being organized.

While Beijing seems to have most of the cards in the battle for the hearts and minds of the SAR's seven million people, the Umbrella Movement has signaled a change in the DNA of Hong Kong politics. This is despite the fact that the protests failed to persuade Beijing to make any concessions regarding the electoral mechanism for the chief executive poll in 2017. 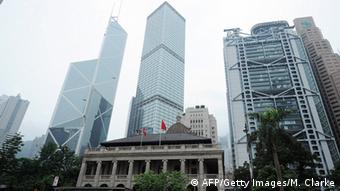 Occupy Central is not only the most sustained civil-society movement in Hong Kong's history but also the most spontaneous and intense. The reason is simple. The Umbrella Movement is the first civil-disobedience movement that is spearheaded by college and even high-school students. The leader of the Scholarism group of students, Joshua Wong, who appeared on the cover of the Asia Edition of Time magazine, barely turned 18-years-old last October. These youngsters have defied the police's tear gas and pepper spray - and even possible imprisonment - so as to have their voice heard.

The students are fighting for their future because they do not want to live in a Hong Kong that is dominated by mainland-Chinese values. Growing signs of Beijing's overt interference in SAR affairs - coupled with the growing prominence of mainland-Chinese companies in the Hong Kong economy - point to the high possibility that the former British colony could become yet another major Chinese city well before 2047, when late patriarch Deng Xiaoping's pledge of "50 years no change for Hong Kong" is supposed to expire.

Through 2015, college students will focus on two things: broadening the appeal of their message to other sectors of Hong Kong society and persuading more young people to register as voters. Scholarism and the Federation of Hong Kong Students - the two main organizers of the Umbrella Movement - must learn how to organize protests, including occupation-style crusades, while not alienating ordinary residents whose livelihood might be adversely affected by developments such as massive disruption of traffic.

More importantly, the city's loose pan-democratic alliance, which includes legislators, scholars, students, professionals and activists from NGOs and religious organizations, have to work tightly together to preserve such core Hong Kong values as rule of law, media freedom and neutrality of the civil service. The Umbrella Movement has demonstrated that Hong Kong people are not just "economic animals" who are only interested in making money. Yet perseverance and skilled organization are needed if pro-democracy activists want to roll back what many regard as the relentless creep of Beijing's influence in Hong Kong.

After more than two months of pro-democracy protests, Hong Kong authorities began to dismantle the city's main protest site. Although most demonstrators chose to leave the camp peacefully, they have vowed to return. (11.12.2014)