The flailing container shipping industry is a massive problem for state banks, particularly in northern Germany. Some fear that skyrocketing risk provisions may cost taxpayers billions of euros. 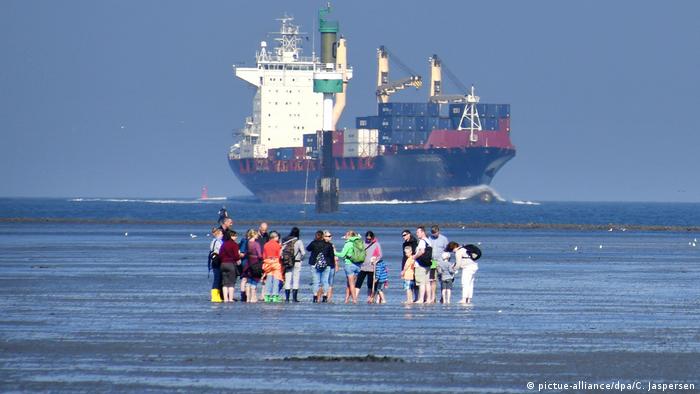 A report published on Sunday by German public broadcaster ARD has suggested that the northern German states of Hamburg and Schleswig-Holstein may have to offer up to 20 billion euros ($21.4 billion) in credit guarantees to prop up banks with bad investments in container shipping.

"Many competitors here have hardly any chance against the new mega-shipping companies in Asia," reporter Heinz-Roger Dohms wrote. "There is so much over-capacity on the world market that they can't afford to send their container ships out at all, or have to do so at charter rates that don't even cover costs."

That's bad news for the banks that underwrite German shipping companies - and German banks maintain around $100 billion in shipping loans, a quarter of the world's total. The financial institutions most affected by the credit squeeze include the HSH Nordbank, the Nord Landesbank and the DVB Bank, all of which specialize in shipping finance. But they're not the only ones.

"Maritime shipping has become one of the biggest problems for German banks and it does not only affect the usual northern, coastal-based suspects like HSH Nordbank and NordLB," wrote the financial newspaper "Handelsblatt" earlier this month. "Dekabank, for example, trimmed its business outlook for 2016 by a fifth because the bank set aside an unexpectedly large amount for bad ship loans in the first two quarters."

Earlier this week, the state premier of Schleswig-Holstein, Torsten Albig, raised hackles when he suggested that in a worst-case scenario he might have to ask for help from the EU or the federal German government to cover bad shipping loans by HSH Nordbank, 85 percent of which is owned by Schleswig-Holstein and Hamburg.

Critics accused Albig himself of mismanagement and hyperbole, but there is consensus that because of HSH, Schleswig-Holstein will have to take up new lines of credit rather than pay off debts as planned. So how did this crisis come about, and is there any way for banks to abandon ship from a sector that seems to be sinking?

The current difficulties in the container shipping industry relate back to its response to the global economic crisis of 2007-8. The downturn in the world economy meant a fall in demand for international shipping and an overcapacity of container ships.

But instead of downsizing, shipping companies invested in even bigger vessels, hoping to take advantage of historically low credit rates and reduce costs.

"The story starts, in a way, in a corporate boardroom in Copenhagen in 2010," shipping expert Olaf Merk wrote for the OECD Insights website. "Then, the world's largest container shipping company, Maersk Line, decided to order a set of new container ships that were larger than the world had ever seen, able to carry 18,000 standard containers."

Competitors followed Maersk's lead and ordered mega-ships of their own, deepening the problem of over-capacity and further pushing down freight rates. The problem was further exacerbated by the opening of the widened Panama Canal last June to allow the waterway to accommodate the largest ships. That has increased competition in an already troubled sector.

It wasn't long until the crisis claimed a very prominent victim, with one of the world's ten largest shipping companies, South Korea's Hanjin, going bankrupt in August. Similar dire straits could be waiting for German shipping companies - and the banks that backed them. The Hamburg Süd shipping company has been sold off

In early December, the Oetker Group announced it was selling the venerable Hamburg Süd shipping company to Maersk. It was a move widely interpreted as an attempt to get out of a sector many financial experts consider toxic. And banks with heavy investments in shipping are coming under pressure too.

Last summer the Bremer Landesbank (BLB) collapsed under the burden of shipping loans. It was taken over by NordLB at the end of last year. BLB has announced plans to fire 20 percent of its work force - its 2016 losses have been estimated at one billion euros. NordLB management has said it could handle the challenge of swallowing BLB, but its own risk provisions increased fourfold in the first three quarters of 2016.

HSH needed government guarantees to keep its risk provisions from tripling, but they still increased from roughly 200 million euros to 520 million euros. The EU Commission has put pressure on Schleswig-Holstein and Hamburg to sell off the bank by 2018. Business publication "Handelsblatt" has reported that the DVB Bank, the third-largest German shipping financer, would need a capital infusion of approximately 150 million euros from its parent company.

Many lenders are trying to shed shipping loans as fast as they can. Commerzbank, for instance, has reduced its portfolio from 18 billion to 5 billion euros, according to "Handelsblatt." But time is of the essence. Forecasts for 2017 are nothing less than dire. 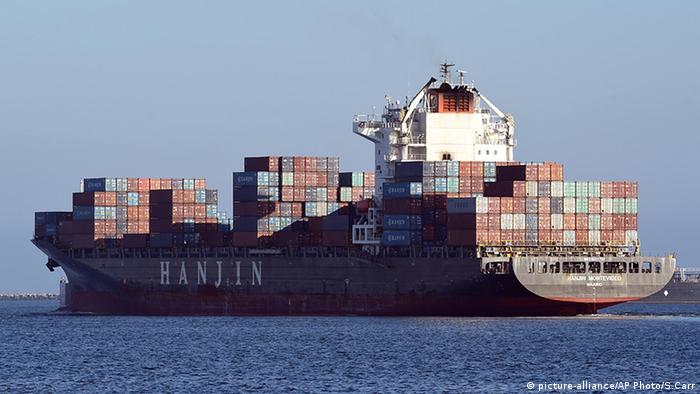 Some experts think Hanjin was just the tip of the iceberg

Going down with the ships?

If anything, experts expect the crisis in the global shipping industry to get worse, as over-capacity problems persist.

"With the delivery of new ships, capacities will further grow by 6 to 7 percent," Lemper told the "Neue Westfälische" newspaper. "If you take account of ships being scrapped, that's an approximate plus of 5.5 percent. But demand will only rise 3 to 4 percent."

"Handelsblatt" quoted the NordLB as saying "new records can be expected in the number of unemployed ships" by the end of this year. That could mean more companies going bankrupt.

"There will very likely be more Hanjins," wrote Olaf Merk after the Korean giant went under last year. "Hardly any container shipping line is turning a profit nowadays and the perspectives are bleak."

That will in turn likely lead to further increases in risk provisions and further stress for many German banks. And the banks will be under enhanced scrutiny. The European Central Bank (ECB) has said that monitoring shipping loans will be one of its priorities in 2017.