A Chinese mega container ship has inaugurated a decade-long expansion of the Panama Canal. Panama hopes the expansion will lead to a boost in container traffic through the Atlantic-Pacific shortcut. 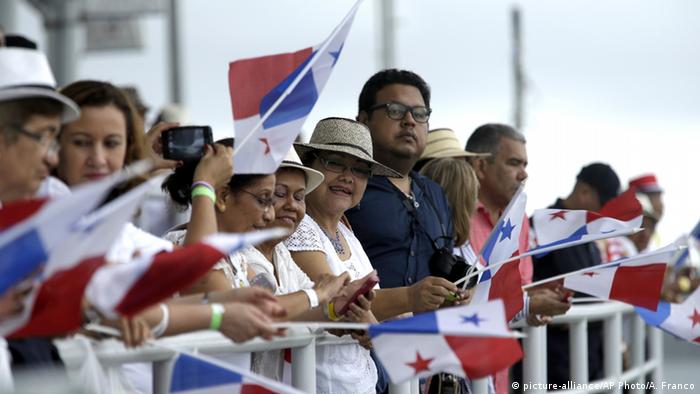 A massive Chinese ship carrying 9,000 containers crossed from the Atlantic to the Pacific through an expansion to the Panama Canal on Sunday, inaugurating a marvel of modern engineering.

The "Cosco Shipping Panama," a 158-foot-wide (48.2 meters) by 984-foot-long vessel, belongs to a new generation of Neopanamax cargo ships that carry three times more than before.

The $5.25 billion (4.7 billion euros) canal expansion launched nearly a decade ago will be able to handle the mega-ships and is expected to double the canal's capacity. Massive liquefied natural gas tankers will now also be able to pass through the canal for the first time.

"This is a great day, a day of national unity and a day for Panama," President Juan Carlos Varela said at the inauguration ceremony. "This is the route that unites the world, the Panama Canal."

Some 30,000 people, several foreign heads of state and dignitaries attended the inauguration.

Completed in 1914, some 6 percent of world trade passes through the Panama Canal every year. The biggest users are the United States and China.

Authorities hope the expansion will increase traffic through the canal, which since being handed over from US control to Panama in 1999 has brought in $10 billion in revenue.

"There is evidence that the Panama Canal, with this expansion, is an important player not only for regional maritime commerce but worldwide," said Oscar Bazan, the Panama Canal Authority's executive vice president for planning and commercial development. "The canal is a winning bet. [Clients] will benefit from saving not only time but also money, because the canal is a route that shortens distance."

The canal will save time and money, but the timing of the inauguration comes as world shipping volumes decline with a slow down in the Chinese economy and low oil prices.

While shipping between China and the US East Coast is expected to grow, some US ports might not be able to handle the new mega-ships. The anticipated growth may take a few year to materialize.

"It's important to remember that the canal does not create demand. The canal opens the route. Supply and demand on a world level is what will decide whether the Panama Canal will really bring more volume or not," said Antonio Dominguez, a general manager for global shipping leader Maersk Line, which moves about 14.2 percent of world trade. "What is certain is that the current canal has maxed out."

The crisis surrounding the Panama Papers has severely damaged the reputation of the Central American country. Now, the ceremony for the expansion of the Panama Canal is aiming to finally put that crisis to rest. (23.06.2016)

Nicaragua's government is building a massive canal that will connect the Pacific and Caribbean. Canal critics fear there will be confiscations of land, environmental mayhem and a job boom that will bypass the locals. (26.02.2015)