April 23, 1616 is recorded as the death date for two literary masters: English playwright William Shakespeare and Spanish novelist Miguel de Cervantes. But it's not true. Here's what the writers don't have in common. 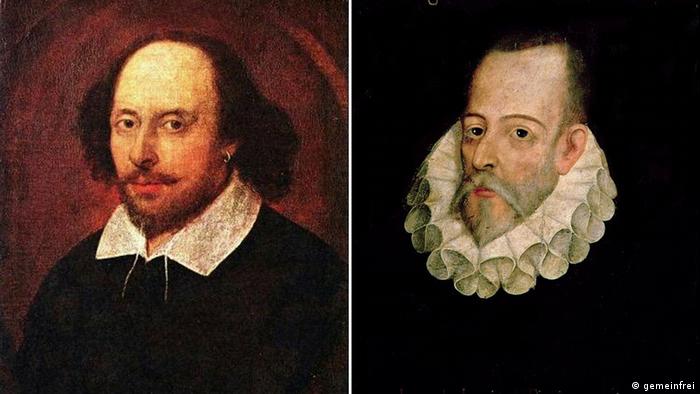 William Shakespeare and Miguel de Cervantes don't have much in common, although they lived in the same era, greatly influenced following generations, and are both regarded as virtuoso writers.

Life dealt the writers different cards - clearly less favorable in the case of the Spanish novelist.

The English bard was born in 1564 in Stratford-upon-Avon. Miguel de Cervantes is 17 years Shakespeare's senior: He was born in 1547 in Alcala de Henares, a town near Madrid.

Shakespeare attended his home town's renowned grammar school, where he was taught Latin and the basics of rhetoric and poetics. Cervantes, from a family of impoverished nobility, studied theology at the University of Salamanca.

Miguel de Cervantes led quite an adventurous life. At age 22, he left Spain for Rome to serve as a valet to Cardinal Giulio Acquaviva, presumably fleeing a Spanish arrest warrant. That same year, he enlisted as a solider in the Spanish Navy, where he fought in the Battle of Lepanto against the Ottoman Empire in 1571.

Cervantes was shot twice in the chest and once in the left hand, an injury that was to leave the hand numb for the rest of his life and garnered him the nickname "el manco de Lepanto," the one-handed man from Lepanto.

William Shakespeare never went to university. In fact, seven years of his late youth are completely undocumented. In 1592, 28 years old at the time, he emerged again, alluded to as an upstart by playwright Robert Green, which has led scholars to believe that by then, Shakespeare was relatively well known.

He certainly was a member of the "Chamberlain's Men," a renowned actors group that changed its name to "King's Men" during the reign of King Jacob I.

From that point on, Shakespeare made a huge splash with his plays and novellas.

Cervantes and his brother were taken prisoner by Ottoman pirates in 1575. Their father offered up his entire fortune and their sister's dowry as ransom, but only Miguel's brother was set free, while Miguel was held as a slave by the Ottoman Sultan's governor of Algiers for five years.

He tried to flee four times and was finally ransomed by Trinitarians in 1580. Legend has it that Cervantes only survived his attempts to escape because the governor was impressed by the man's courage and because he hoped for a handsome ransom.

His first - and unsuccessful - play, "Los Tratos de Argel," reflected what Cervantes went through during his years as a prisoner in Algiers.

Success continued to elude him, however, so in order to pay his bills, the Spaniard again enlisted as a soldier in 1580.

Unlike Shakespeare, who was a very successful author and businessman, Cervantes was never able to support himself with his writing.

Shakespeare co-owned first the Globe Theatre, and later the more exclusive Blackfriars Theatre - and made a fortune that allowed him to live in the second-largest house in his hometown.

Cervantes, on the other hand, had a temporary job as a purchasing agent for the Spanish navy and landed in prison again in 1597-98 and in 1602.

That's where he started writing his literary masterpiece, Don Quixote - the story of "The Ingenious Gentleman Don Quixote of La Mancha."

The best book in the world

Don Quixote, a parody of the chivalric romances popular in the 16th century, was an immediate hit. But it didn't make the novelist a rich man: Cervantes sold the rights for an unknown sum to his publisher.

Centuries later, in 2002, a group of 100 top international writers voted the novel "the most meaningful book of all time" in a poll organized by editors at the Norwegian Book Clubs in Oslo. Don Quixote is actually regarded as the birth of the genre of the novel in literary history.

Interpretations of the book vary, however, and to this very day, critics disagree what it's actually trying to say, and who the target audience is.

Despite the geographic distance and their dissimilar biographies, in their works Cervantes and Shakespeare both focus on the discrepancy between reality and imagination. They both give the conflict between ideals and reality center stage; they both love to toy with ambiguities. 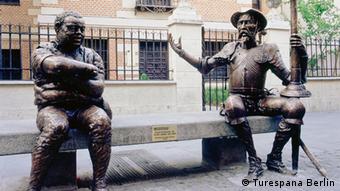 The "ingenious gentleman" and his sidekick, Sancho Pansa

Shakespeare left London for his hometown Stratford a few years before he died at the age of 52. Cervantes, though innocent, was embroiled in a murder trial. It's not clear whether he served a prison sentence or not, but in 1605, Cervantes published the first volume of Don Quixote, to be followed by volume two 10 years later.

The death date recorded for both Shakespeare and Cervantes is April 23, 1616.

Shakespeare was buried at Holy Trinity Church in Stratford. Cervantes' remains vanished in a mass grave, to be identified many centuries after his death, in 2015. The initials M.C. on a casket, and the wounds on his chest and hand were clues to the identity of the bones.

The Spanish author actually died 10 days earlier than his English contemporary - the countries used different calendars back then. England used the Julian calendar, while Spain had already adopted the Gregorian calendar.

A very singular copy of the first known collection of Shakespeare's plays has been uncovered in an aristocratic country house in Scotland. The First Folio is among the most valuable books in the world. (07.04.2016)