At least four people have been killed and eight injured in anti-government protests in Venezuela. The deaths brought to at least 80 the number of people killed since the protests erupted in April. 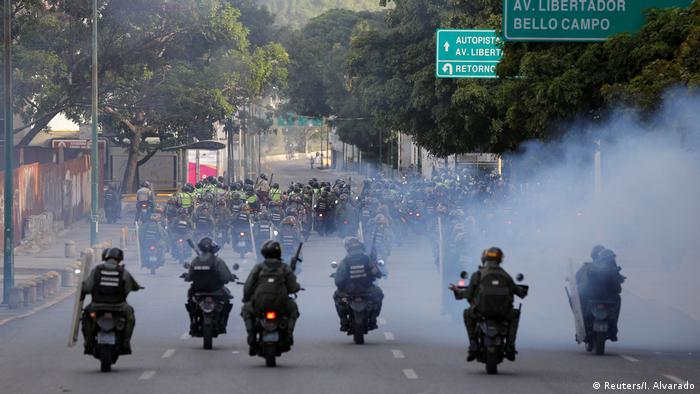 An opposition member of Venezuela's parliament confirmed Saturday that the victims ranged in age from 20 to 49 and had died from gunfire in the city of Barquisimeto, 350 kilometers (about 215 miles) west of the capital, Caracas.

Opposition protesters led by the Democratic Unity Roundtable (MUD) are demanding early elections and an end to the government intention to rewrite the constitution.

They accuse President Nicolas Maduro of attempting to stack the still nominally independent judiciary and civil service with placemen, reducing opposition within the state itself to the socialist president's aim of consolidating power.

They also say Maduro is undermining democracy by canceling a key referendum and is interfering with Congress. They demand a presidential vote and a resolution of the ongoing economic crisis that is creating severe food and health care shortages.

Maduro has claimed the opposition is funded, directly and indirectly, by hostile external powers including the US.

Venezuela has seen its coffers dry up as the price of oil - the country's main source of income - has almost halved in recent years.

Maduro, once a loyal follower of Hugo Chavez, the charismatic socialist president who died in 2013, is struggling to hold Chavez's coalition of peasant, communal and other disparate associations together as the economy flounders.

Opponents of Maduro also protested in Caracas on Saturday in support for Chief Prosecutor Luis Ortega Diaz, whom the government is threatening to force from office.

Maduro's term in office ends in January 2019 and to remove Diaz a majority of the legislature - now controlled by the opposition - is needed.

The case is one of several in which opponents of the ruling party are facing possible ousters.

About 1,000 people have been hurt and another 3,500 arrested since daily protests began on April 1.

On Friday, a group of 20 students was allegedly arrested by the police in Caracas and kept locked up in an unmarked vehicle without ventilation.

Venezuelan President Nicolas Maduro says a chopper dropped grenades on the Supreme Court in Caracas, describing it as a "terror attack." Earlier, he threatened war if his opponents were to topple his government. (28.06.2017)