Prosecutors in Bosnia have brought terror charges against 12 people accused of traveling to Iraq and Syria to join the "Islamic State" (IS). An estimated 200 Bosnians have left to fight with the extremist group. 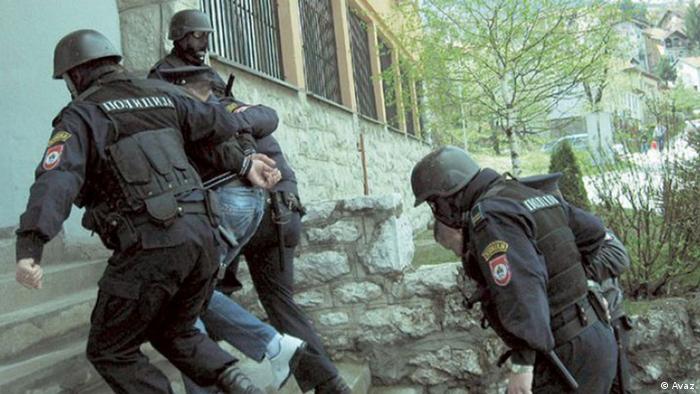 The Bosnian nationals were charged with "becoming part of a terrorist group and illegally participating in conflicts in Syria in Iraq," according to a statement from the state prosecutor's office in Sarajevo.

The men allegedly traveled to Turkey during 2013 and 2014 before crossing illegally into Syria, where they joined "Islamic State" (IS).

The prosector said some of the suspects had been taken into police custody, while others were under house arrest.

The latest terror charges follow a number of arrests, and the discovery of weapons, bombs and military equipment in raids carried out across the Balkan country in the past several months.

Local intelligence officials estimate some 200 Bosnians have left to fight for jihadist groups in the Middle East, with about 50 having already returned home.

Over the past year, IS militants have seized large chunks of territory in both Iraq and Syria as part of their campaign to establish a "caliphate." The group has also called on Muslims around the world to support its radical interpretation of Islam.

In a bid to discourage Bosnians joining such groups, the government last year introduced jail terms of up to 10 years for people convicted of leaving the country to fight for Islamist militias or actively supporting them.

While most Bosnian Muslims are either secular or practice a moderate form of Islam, there has been an increase in the number of radical Islamists since the country's civil war.

Between 1992 and 1995 foreign mujahedeen forces came from abroad to fight alongside the Bosnian Muslims against the Orthodox Serbs and Catholic Croats. Although most of them are thought to have left after the end of the conflict, some have stayed.

Bosnian police have arrested 11 people suspected of fighting for Islamist militants in Syria or Iraq or otherwise supporting such groups. Five suspects arrested in a similar operation two months ago remain in custody. (13.11.2014)

In northern Bosnia, a gunman stormed a police station, killing one officer before dying in the crossfire. Authorities have now launched an investigation into what they are calling a "terrorist" attack. (27.04.2015)