Calling it "illegal," Russia and Serbia stepped up their efforts to annul Kosovo's independence Monday, Feb. 18 with both countries calling emergency sessions of parliament to discuss their next moves. 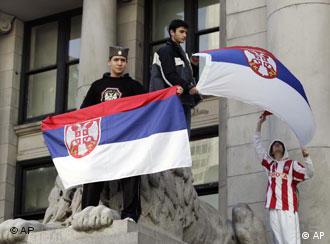 Serbs have protested against Kosovo's independence as far away as Vancouver

Russian deputies gathered to finalize a text on the "consequences" of Kosovo's declaration while preparing an official condemnation of the act and urging UN chief Ban Ki-moon to take a tougher stance.

"The Kosovo example could plunge the world into chaos," senior parliamentarian Mikhail Margelov was quoted by ITAR-TASS as saying. The independence declaration goes against "international law and morality.... This is a dangerous precedent," he said. 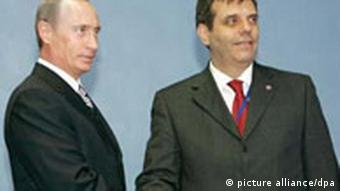 Putin and Kostunica stand side by side on Kosovo

Ahead of further discussion at the United Nations, Russian foreign ministry official Alexander Botsan-Kharchenko urged the UN Secretary General Ban to stand up for UN resolutions and rules that he said backed Moscow's stance.

"We think he should clearly define his position," Botsan-Kharchenko told reporters in New York. WHe should remain loyal to the United Nations' charter and to the Security Council's resolution 1244 on Kosovo."

A veto-wielding permanent member of the UN Security Council, Russia has consistently opposed Kosovo's bid for independence, siding with Serbia. However, despite its power within the UN, Russia failed to secure Security Council backing for a bid to declare the independence declaration by Kosovo's ethnic Albanian majority "null and void."

Russian newspapers on Monday said Russia was also likely to use Kosovo's declaration to put more pressure on neighboring Georgia, which has two separatist provinces -- Abkhazia and South Ossetia -- that adjoin Russia and have Moscow's de facto backing.

Despite opposing Kosovo's independence, Russia has said that it could serve as a precedent for the separatist provinces. At the same time Moscow has said it does not plan to recognize independence for the two provinces, reflecting worries about separatism within Russia's own borders.

South Ossetia and Abkhazia plan to ask Russia and the UN to recognize their independence following Kosovo’s declaration of independence.

"In the near future Abkhazia will appeal to the Russian parliament and the UN Security Council with a request to recognize its independence," self-declared Abkhaz President Sergei Bagapsh was quoted as saying by the Interfax news agency.

"South Ossetia will in the near future appeal to the Commonwealth of Independent States and the UN with a request to recognize our independence," South Ossetian President Eduard Kokoity was also quoted as saying by the news agency, referring to a grouping of ex-Soviet states that includes Russia.

Analysts say Russia is balancing its position as it seeks to use its separatist allies in Georgia to gain diplomatic advantage over the Georgian leadership, which is seeking to join Western institutions such as NATO.

Meanwhile, the Serbian parliament will convene in Belgrade later Monday to adopt a decision to "annul" Kosovo's independence proclamation on the grounds that it "violates the sovereignty and territorial integrity of the Republic of Serbia." 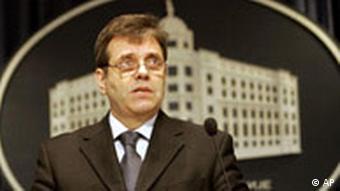 Serbia also announced that police had filed criminal charges against Kosovo Albanian leaders for "organizing the proclamation of a phony state on Serbian territory," according to Tanjug.

The Serbian government also decided to proclaim as "null and void" all decisions by the European Union to send a mission to Kosovo.

"These decisions have no legal foundation for Serbia and produce no obligation of Serbia towards the European Union," the government statement read.

The EU is preparing a Kosovo mission dubbed EULEX, which is designed to help the 90-percent ethnic Albanian territory on its road to independence by deploying some 2,000 personnel.

Kosovo has been run by the United Nations since mid-1999, after a NATO air assault drove out Serbian forces waging a brutal crackdown on separatist ethnic Albanian guerrillas and their civilian supporters.

With the backing of the EU and the US, nationalist Kosovo Albanians have reached their goal of -- limited -- independence. But real peace in the Balkans is still in the distant future, says DW's Verica Spasovska. (18.02.2008)

What effect will Kosovo's independence have between Russia and the European Union? Please include your full name and country with any reply.