A civil war has been raging in Cameroon since 2016. Separatists in Anglophone regions want their own state, called Ambazonia.

Five years ago, angry protests against Francophone dominance in Cameroon escalated — and soon led to armed clashes between various Anglophone separatist groups and the central government.

The conflict between the French-speaking majority state and the smaller English-speaking parts of the country has been simmering for decades.

Cameroon was under German colonial rule from 1884 to 1916. After the German Empire was defeated in World War I, the League of Nations handed one portion of Cameroon over to France, the other to Britain.

French-administered Cameroon gained independence in 1960. A year later, a referendum was held in British-ruled Cameroon over whether to join the newly independent Cameroon or Nigeria. The option of independence was not on the ballot. The territory's northern half opted to join Nigeria, whereas the south chose to merge with Cameroon. Since then, Cameroon has been split between a French-speaking eastern and an English-speaking western half.

October 2016: Anglophone Cameroonians launch wildcat strikes, demanding equality. Judges, lawyers and teachers call for the English language be given full recognition in public administration, the judiciary and the education and health care sectors, as guaranteed by the constitution. They want to see an end to the systemic discrimination of Anglophone Cameroonians end.

Protesters criticize that English-speaking regions of Cameroon are far less developed than French-speaking parts. They also take issue with crude oil extraction off the country's southwestern coast, arguing the proceeds only benefit Cameroon's Francophone central government. Teachers and judges complain that English speakers are underrepresented in parliament, the government, public administration and universities.

Thousands of French-speaking judges and teachers were dispatched to Anglophone Cameroon at the start of the 2016 school term. Cameroon's central government has been working to supplant the region's British-style legal and education system with the French model. Anglophone Cameroonians complain that those French-speaking judges and teachers are undermining the region's English-language culture.

November 2016: The central government first remains silent on the situation, then suppresses the Anglophone protest movement. Subsequently, tension escalate, with English-speaking Cameroonians variously calling to reestablish a federal system, or split from Francophone Cameroon. Elements within the separatist movement now regard English-speaking Cameroon as an independent state, calling it Ambazonia. 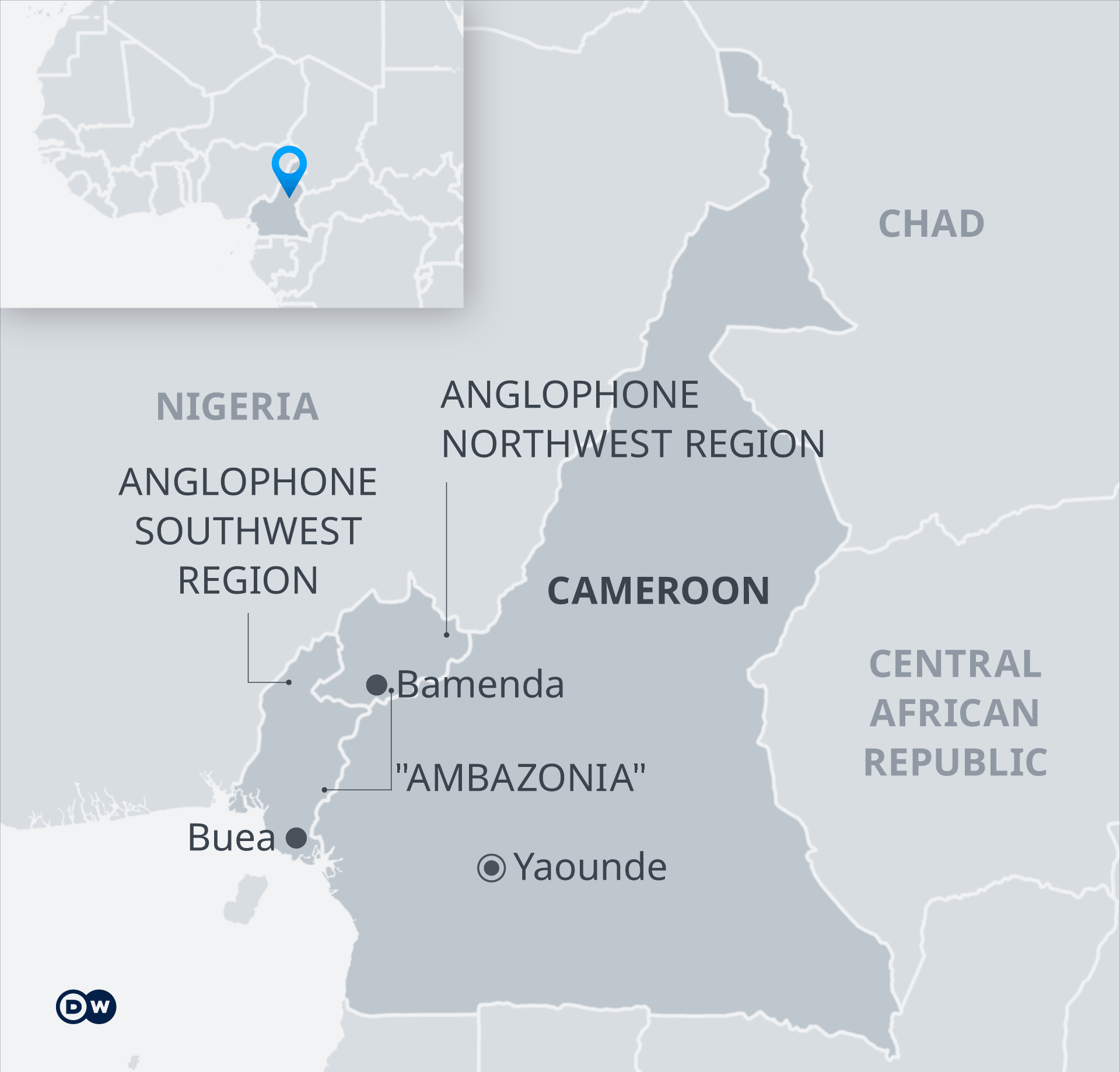 A whole range of different, Anglophone separatist groups emerge, who total some 4,000 members altogether. They are supported by Cameroon's diaspora. The most influential separatists organizations are the Ambazonia Defense Forces, Ambazonia Self-Defense Council, African People's Liberation Movement and its armed wing, the Southern Cameroons Defense Forces. The secessionist movement is riven by ethnic rivalries, lacking overall military and political leadership.

December 2016: Several people are shot and killed by security forces in the city of Bamenda, in Cameroon's northwestern Anglophone region. Dozens are wounded in the clashes. The army fails to bring the situation under control.

January 2017: Cameroon's central government launches a concerted campaign to weaken Anglophone separatist groups. English-speaking Cameroon is cut off from the internet from January to April 2017. Relatives of Anglophone activists are arrested. Cameroon's army and police force crack down on renewed protests staged by English-speaking teachers and lawyers. Separatist groups like the Cameroon Anglophone Civil Society Consortium subsequently call on all English speakers to participate in general strikes every Monday, bringing public life to a standstill.

International organizations become increasingly aware of the conflict. Human Rights Watch (HRW) reports some 4,000 people have died in clashes, with around 60,000 forced to flee to neighboring Nigeria. It says about 850,000 children are unable to attend school due to the ongoing conflict. Some 2.3 million out of the 5 million Anglophone Cameroonians depend on humanitarian aid, according to HRW.

October 2018: President Biya, in office since 1982, is reelected with 71.28% of the vote. The election is, however, marred by allegations of fraud. Political and ethnic tensions between Biya supporters and the opposition intensify. 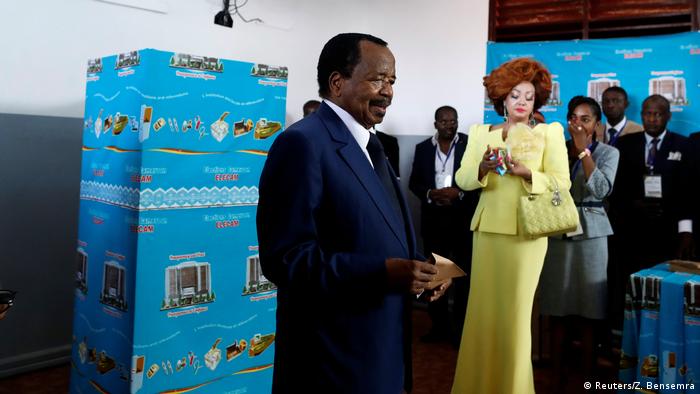 Paul Biya was reelected in October 2018

February 2019: Maurice Kamto, who heads the Cameroon Renaissance Movement (MRC) opposition party, is sentenced to eight months behind bars for inciting violence. Kamto is has repeatedly protested against systemic discrimination.

Most opposition parties, however, reject the format, as key separatist leaders remain in jail. They also criticize the summit will neither address a potential return to federalism, nor possible independence for English-speaking regions of Cameroon. 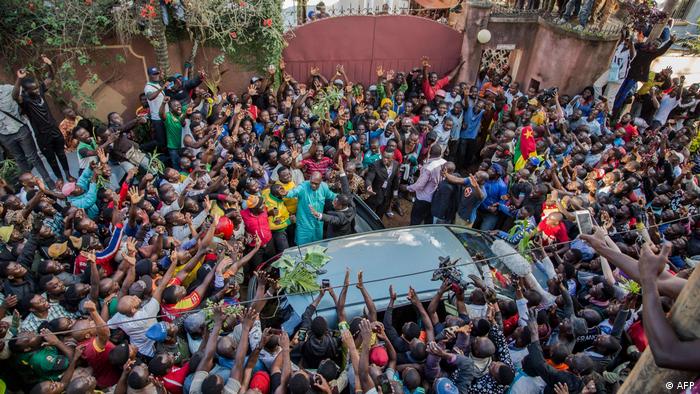 Opposition leader Maurice Kamto was released from prison on October 5, 2019

March 2020: Attacks by radical Islamic terror group Boko Haram on northeastern Cameroon intensify. Incursions are launched from Nigeria and Chad, where Boko Haram is based. The campaign brings further instability to Cameroon.

September 2021: Deadly attacks by various separatist groups on military posts and vehicles of the Cameroonian army continue to be a daily occurrence. Cameroonian security forces ready for robust clashes on October 1, which officially marks the founding of the Cameroonian state. On the same day, separatists celebrate the proclamation of the independent Republic of Ambazonia in 2017. The self-declared entity is still not recognized internationally.

As more people flock to Cameroon's cities, they are looking to buy land and settle down. But the process is fraught with uncertainties.