New offspring for the Copernicus family! The Earth observation satellite Sentinel-6 is scheduled to be launched on November 21. Its superpower: Sentinel-6 can monitor the ocean with millimeter precision. 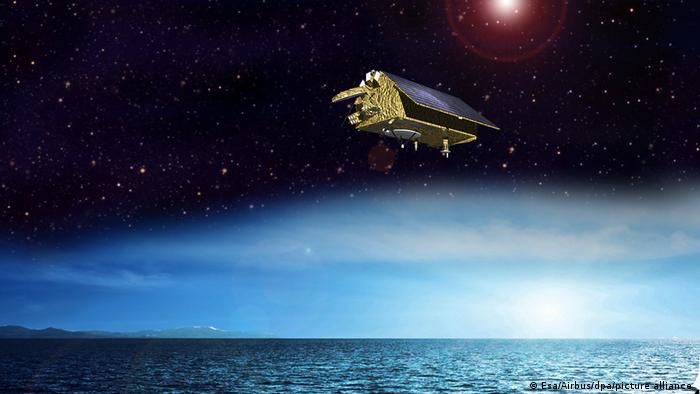 Does Sentinel-6 already know what an ungrateful — but also very important — task it is taking on?

The Earth observation satellite is intended to measure our oceans and chart the sea level. And this is likely to be a rather depressing sight from space. After all, it is no secret that the sea level is tending to rise  with growing rapidity. While it increased by only 2 centimeters (0.79 inches) in the entire 18th century, it already went up by 6 centimeters in the 19th century and a whole 19 centimeters in the 20th. Industrialization and human-made global warming certainly have had something to do with this.

The consequences are already very real.  About one in 10 people live in a region that is less than 10 meters (33 feet) above sea level, and many people living on the coast are already affected by stronger storms and more flooding than their parents or grandparents were.

The Intergovernmental Panel on Climate Change (IPCC)  estimates that if climate change continues at today's rate, sea levels could rise by a meter by the end of the century. This could be dangerous for many countries. It would affect not only the Maldives in the Indian Ocean, which is the lowest-lying country on Earth at an average of 1.5 meters above sea level, but even the coasts of Europe.

What can Sentinel-6 do about it?

"Sentinel-6 Michael Freilich" is the full name of the latest Earth observation satellite. It is named after Dr. Michael Freilich, the former director of NASA's Earth Science Division and a tireless advocate for advancing satellite measurements of the ocean.

Its mission now is to measure and chart the rise of the sea level more precisely than ever before. Sentinel-6 will provide information that will help researchers understand how climate change is reshaping coasts — and how fast this is happening. If researchers are to better understand how sea-level rise will affect humanity, they need climate records that are as long as possible. Sentinel-6 can provide the data needed.

"Sentinel-6 Michael Freilich is a milestone for sea-level measurements," said project scientist Josh Willis of NASA's Jet Propulsion Laboratory in Southern California, which manages NASA's contributions to the mission. The satellite is scheduled to start its journey from the nearby Vandenberg Air Force base in Lompoc on Saturday, November 21.

"It's the first time we've been able to develop multiple satellites that span a complete decade, recognizing that climate change and rising seas are here to stay," Willis said.

Providing the launch site is one of the ways that NASA is contributing to the joint mission with the European Space Agency's (ESA) Copernicus program.  Europe's meteorological satellite agency EUMETSAT  and the US weather service NOAA are also involved in the Sentinel-6 mission.

Sentinel-6 is the first of two identical satellites that are to be launched into space. Sentinel-6B, the twin satellite, is scheduled for launch in 2025. The two satellites are meant to collect data for at least five years.

"This continuous record of observations is essential for tracking sea-level rise and understanding the factors that contribute to it," said Karen St. Germain, director of NASA's Earth Science Division.  "With Sentinel-6 Michael Freilich, we ensure those measurements advance both in number and in precision."

How does Sentinel-6 work?

The latest addition to the Copernicus Earth Observation Program will continue the decadeslong monitoring of sea level from space carried out by the Jason satellites.  It will scan 95% of the global sea surface within 10 days — from an altitude of more than 1,300 kilometers (800 miles) and to an accuracy of less than 1 millimeter.

In addition, it is also to collect precise data on atmospheric temperature and humidity, which can help improve weather forecasts and climate models.

The satellite sends out radar impulses that are reflected from the sea surface and then received again by the spacecraft. "Nobody can do anything with this data at first. It has to be converted into a high-precision distance measurement," says Manfred Lugert, head of Copernicus Mission Development and Jason-CS/ Sentinel 6 program manager at EUMETSAT. He said wave heights and atmospheric influences would also have to be taken into account when measuring distances.

Two independent navigation systems are also on board for determining the location. The satellite's orbit is regularly measured with a laser.

By working together with other satellites, Sentinel-6 will also help to make inferences about the density and thickness of ice. This is important, says Josef Aschbacher, ESA's director for Earth observation programs. The Greenland ice sheet is currently melting  at three times the rate in the 1990s, he says. "We will now get a global measurement every 10 days — in other words, a picture of what the momentary situation is like," says Aschbacher. "The satellite will provide data that has not been available in this detail before."

What's so special about Sentinel-6?

Earth observation satellites as such have been around for decades — for example, TIROS-1, the first experimental weather satellite, was launched on April 1, 1960.

The Copernicus Earth Observation Program launched the Sentinel-1A satellite on April 3, 2014, followed by 1B on April 25, 2016. Since then, other types of Sentinel satellites have been added. The European Commission (EC) and ESA had already founded Copernicus back in 1998. All data from the program is openly accessible, free of charge.

Sentinel-6, the latest launch, will be an orbiting high-tech showcase. "It has a new radar on board with greater precision that will be able to measure a rise in sea level even more accurately," says Aschbacher. The satellite will be controlled from a new, highly modern control center at EUMETSAT, according to Manfred Lugert.

What about all the other (Sentinel) satellites out there?

"There must be a few hundred satellites that are currently in orbit and monitoring our Earth," Aschbacher says. The Europeans are leading in this field, he says, because their system covers everything — from science and weather forecasts to disaster control.

The Sentinel-1 satellites provide detailed radar images of the planet's surface in all types of weather, day and night. Sentinel-2's  specialty is to detect changes in vegetation and do things like provide crop forecasts, chart forests and monitor the growth of wild and agricultural plants. Sentinel-3 provides temperature measurements of land and ocean.

Sentinel-2B: What you need to know about ESA's new Satellite

Sentinel-4, whose launch is planned for 2022, will collect data on the concentration of pollutants in the air. Sentinel-5 is a mission to measure atmospheric gases worldwide. Sentinel-5P  analyzes the composition of the atmosphere.

But Aschbacher says there is still a lot to be done and still parameters that need to be measured more accurately. For example, he says, the greenhouse gas carbon dioxide is still not being measured precisely and comprehensively enough.

For the future, he would like to see a satellite system that measures all these parameters. The data could then be linked and coupled with artificial intelligence. This would make it possible to make real predictions and simulations about the Earth system, such as about how high the rise of the sea level would be under different temperature scenarios.