Italian rescue teams have halted their search amid choppy waters for victims of a migrant shipwreck off the coast of Lampedusa. At least 111 bodies have been recovered so far, with hundreds more feared dead. 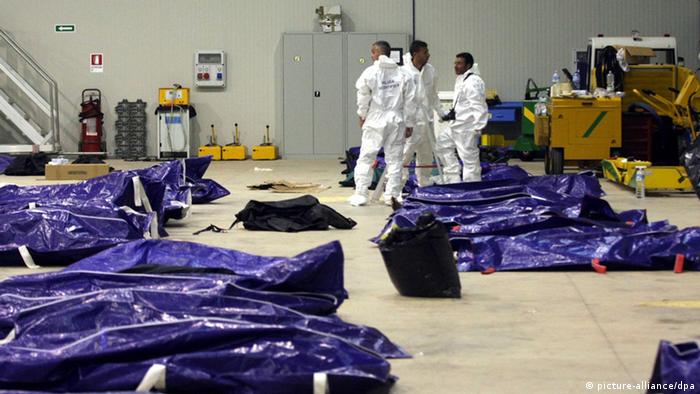 Contending with rough seas, Italian divers resumed their search on Friday for bodies trapped in the wreckage of a boat packed with migrants which sank off the island Lampedusa Thursday. In the afternoon, however, facing worsening conditions, the team of around 40 divers were told to call off their search.

Rescue teams have so far recovered 111 bodies and expect to find more than a hundred others in the submerged wreck, which is sunk in about 40 meters of water (131 feet).

"Though the bad sea conditions persist, our guys are ready to go down if a window opens up that makes it safe for them," coastguard spokesman Filippo Marini told the Reuters news agency.

Officials say just 155 people survived the wreck out of the 450 to 500 believed to have been on board.

The boat, carrying mostly Eritreans and Somalis, sank in the early hours of Thursday after a fire onboard triggered a panicked rush to one side of the boat, which capsized it less than one kilometer (0.6 miles) from the shore.

Outpour of grief, demands for change

The tragedy, one of the worst of its kind in Europe, has prompted outpourings of grief and demands for a fresh immigration policy to deal with migrants fleeing poverty and strife.

Pope Francis said Friday was a "day of tears" and underlined the desperate state that faced the poor in a "savage world."

Italy also held a day of mourning on Friday, with schools observing a minute's silence in memory of the victims.

Earlier in the day, about 100 coffins and several hearses arrived on the island via a ferry for the dead, who have been lined along the floor of a hangar at the local airport.

Lampedusa is a tiny fishing and tourist island located halfway between Sicily and Tunisia. Over the years, it has seen tens of thousands of asylum seekers from Africa arriving in its port in unseaworthy boats.