As children, we've probably all fantasized about uncovering an ancient buried treasure? Scuba divers have done just that. They found a priceless trove of gold coins - the largest ever discovered in Israel. 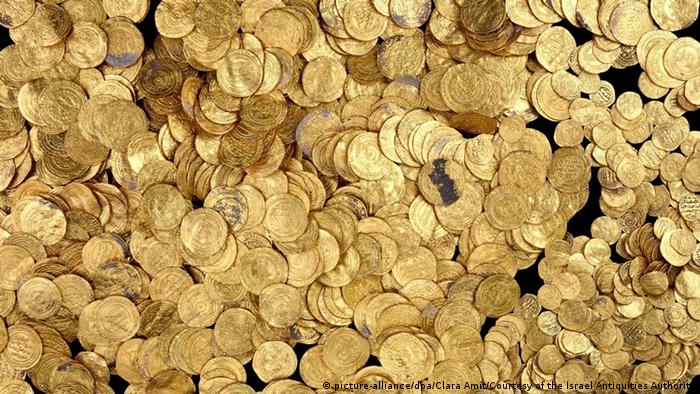 A group of five people were scuba diving out in a Roman-era port in Caesarea on the Mediterranean coast of Israel when they spotted something which looked like toy coins. As soon as they realized they were real, they reported their find to the authorities.

Using a metal detector, the Israel Antiquities Authority returned to the site and discovered almost 2,000 gold coins weighing nine kilograms (almost 20 pounds). It is the largest trove of gold coins found off the Israeli coast.

The different denominations of dinars in the collection date back to the Fatimid Caliphate, which ruled in the Middle East and North Africa from 909 to 1171.

If the find is now "so valuable that it's priceless," as Israeli Antiquities Authority spokeswoman Yoli Schwartz told AFP, it was already worth a great deal at that time. Experts say further excavations in the area are necessary to understand why so many coins landed there.

Speculating on the treasure, Kobi Sharvit, director of the Marine Archaeology Unit of the Israel Antiquities Authority, offered different explanations in an official statement. There might have been "a shipwreck there of an official treasury boat which was on its way to the central government in Egypt with taxes that had been collected," he said. He added that it also could have belonged to rich merchants trading along the coast.

Robert Cole, the expert numismatist at the Israel Antiquities Authority was impressed by the state of preservation of the coins "Despite the fact they were at the bottom of the sea for about a thousand years, they did not require any cleaning," he explained. He pointed out that some of the coins show teeth and bite marks, as their owners used to "physically" inspect their authenticity.

Although the authorities warmly thanked the scuba divers for reporting their discovery, they did not get a finder's fee. By law, such antiquities belong to the state. People who steal them or even omit to report a find can be punished with up to five years of prison.

A visit to the Berlin headquarters of the state-owned KfW bank is full of surprises. Its basement contains a treasure trove of relics of East German history, including the 500-mark note that never saw the light of day. (03.11.2014)

A Swiss museum claims to have inherited the collection owned by a German man whose hoard included work stolen by the Nazis. The Bern museum called the bequest a complete surprise that brought with it a burden. (07.05.2014)

lllegal gold mining has devastating environmental, social and health impacts. But projects aimed at bringing small-scale mining operations out of the informal sector are helping to give bling a good name. (27.01.2015)