The Leibniz Institute for Marine Sciences at Kiel University is getting logistical support from Greenpeace, as an unusual joint expedition looks to fill a gap in our knowledge of the Arctic and its ocean ecosystems. 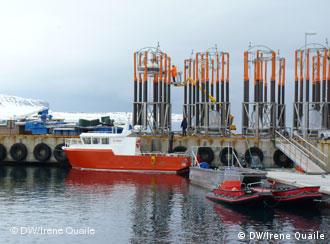 Keeping a safe distance to the iceberg floating in the Kongsfjord, the Greenpeace ship, the Esperanza, leaves the harbour of the Arctic research station Ny Alesund. As well as the regular crew from the organisation better known for spectacular protests and campaigns, the Esperanza is transporting a team of scientists and some large, intriguing rectangular frames, with what look like plastic bags hanging down from the top.

When it emerged that there was no scientific vessel available during the crucial weeks of the busy summer season needed for the experiment, Greenpeace offered to transport the bulky but delicate equipment from Kiel up to the Arctic. It's designed for a unique experiment to research the effects of ocean acidification.

Too little is known about the Arctic

There is a clear division of labour. The scientists are responsible for the experiments. Greenpeace is providing logistic support. The environmental group agreed to transport the equipment up to the Arctic, deploy it in the Kongsfjord and take it home later in the summer.

Greenpeace is dependent on scientific results, explains Greenpeace climate campaigner Martin Kaiser, on board the Esperanza. The last IPCC report lacked scientific data on the Arctic area. That is why Greenpeace decided to offer their ship as a platform for the work of the scientists this year. He stresses the scientists will be carrying out their work independently. 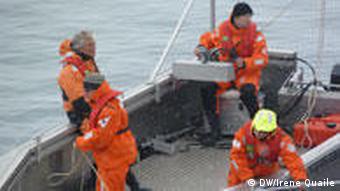 Professor Ulf Riebesell from the Leibniz Institut is heading the team of 35 scientists investigating the effects of ocean acidification on the marine ecosystem in the Arctic fjord.

The world's oceans absorb a considerable amount of the carbon dioxide we emit. So far, they have taken up a third of the CO2 we have emitted, the Professor explains. That reduces the greenhouse effect, he says, but it's harmful to some of the organisms in the ocean. The CO2 reacts with the sea water, making it more acidic.

The ocean in a giant test-tube

The large objects on the helicopter deck of the Esperanza will soon be turned into what Professor Riebesell describes as giant test-tubes, inside eight and a half metre-high floating frames. Once the frames are in the water, the plastic sacks drawn up at the top will be released and dropped into the depths, enclosing a water column some 17 metres long. These are called mesocosms, "medium-sized worlds," as the Professor likes to call them.

There will be nine mesocosms in all. A different amount of CO2 will be added to each to simulate the conditions in the water in the coming years and decades, depending on how much CO2 is emitted into the atmosphere. An international team of 35 scientists will take samples everyday and use the facilities at nearby Ny Alesund, the world's northernmost marine laboratory, to examine how the organisms in the water are reacting to increasing acidification.

The Arctic – the "canary in the mine-shaft" for planet earth

Professor Jean-Pierre Gattuso from the University of Paris is responsible for the international coordination of the project. He is also carrying out some of the tests on the "population" of the Arctic fjord. Ocean acidification only really became an important research topic in the last 15 years, he says. And although there have been plenty of laboratory experiments around the world on the effects of ocean acidification, this is the first large-scale experiment of this kind, designed to look at the effect on whole ecological communities in situ.

The Arctic poses a big logistic challenge to the team. However, it is of key importance to carry out research here, says Gattuso, because the cold waters of the Arctic and Antarctic are already more acidic than those of tropical or temperate oceans. Gases – including CO2 – dissolve much faster in cold water. The EPOCA expert says the Arctic could already become corrosive for some organisms within the next 10 years. That means the sea water could actually dissolve the shells or skeletons of many organisms. 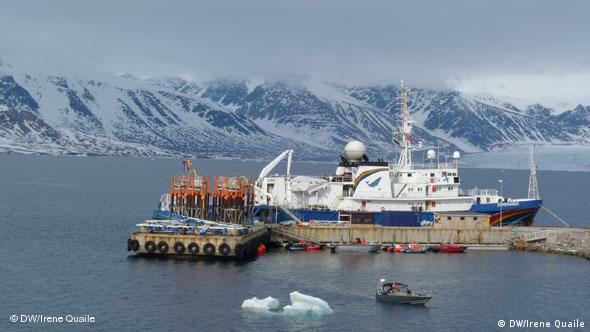 The scientists have formed an unusual alliance with Greenpeace

Although the scientists here are researching tiny oganisms like plankton, algae or pteropods – a type of small snail – which live in the Arctic water, the EPOCA team says the results are of global significance.

"We have to understand that everything is connected," says Professor Gattuso. "If the productivity of the sea water decreases because of warming or acidification, this will have consequences for the birds which eat the marine organisms. It will have consequences for the polar bears, the seals, the whole eco-system." He also describes the Arctic as the "canary in the mine-shaft" for the planet. "This is where a lot of change is already happening – and very fast."

Professor Ulf Riebesell adds a reminder that the coral reefs, which provide coastal protection, fish and other food and play an economic role as a tourist attraction in some parts of the world, are massively at risk from acidification.

Succesful alliance in the Kongsfjord

As the Esperanza arrives at the place in the fjord where the team has sunk the anchors for the mesocosms over the last few days, several small dinghies manned by scientists in survival suits to protect against the icy water are already waiting. There's a buzz of excitement all round, as the joint venture between Greenpeace and the scientists reaches an initial climax. The crane on the Esperanza gently hoists the first mesocosm over the side. In the dinghy down below, the deployment team give their ok to lower the "over-sized test-tube" into the ocean. 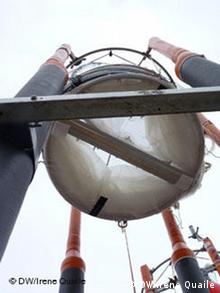 The mesocosms have now been dropped into the sea

The deed is done, "medium-sized ocean world" number one is in the water. Professor Riebesell is happy with the joint venture so far. He's very grateful to Greenpeace for making the expedition possible. A lot of discussions took place before the agreement with the NGO was reached, says Riebesell.

The scientists and the European Union, which is providing the funding, had to be sure that their independence would be guaranteed. It had to be made absolutely clear, in a memorandum of understanding, that the scientists would not be influenced in any direction or used in any way as part of a campaign.

Greenpeace climate campaigner Martin Kaiser experienced the reluctance of many scientists ahead of the expedition. "But the longer we work together, the more we have the impression that the initial scepticism has given way to an appreciation that we have made an experiment possible which would not have happened otherwise," says Kaiser.

With the mesocosms successfully deployed in the Kongsfjord, the scientists are working independently on their experiments. The Esperanza has moved on to what might seem like more "typical" Greenpeace activities – documenting the activities of fishing fleets in the fragile Arctic region. They are also mapping some uncharted regions in the depths of the ocean. Next month the partners will meet up again – when the Esperanza comes back to Ny Alesund to take the mesocosms home to Kiel.

Two German commerical ships are sailing from Asia to Europe via Russia's Arctic coast in a historic journey, navigating the once ice-blocked North East Passage. (12.09.2009)