Expedition sets off to measure impact of warming on the Arctic | Environment| All topics from climate change to conservation | DW | 14.05.2010

The Arctic is especially sensitive to changes in atmospheric conditions. A research team, backed by Greenpeace, has set off on a unique expedition to measure the likely impact of current rates of warming on the region. 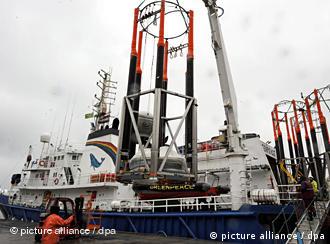 Equipment for the experiments is loaded onto the Greenpeace ship Esperanza

For climate scientists, the Arctic is like the proverbial canary in the mineshaft. Because it's so sensitive to change, it serves as an alarm for global trends.

On Friday (14.05.2010), a team of scientists is setting off from Kiel, Germany, on board the Greenpeace ship Esperanza to measure just how dramatically the region could be affected by current warming scenarios.

The Greenpeace "Arctic under Pressure Expedition" aims to carry out unique experiments, which are to be among the first to explore the effects of rising carbon dioxide (CO2) levels on arctic marine life.

Getting close to nature 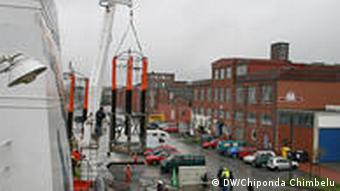 The Arctic's ice cover reflects a significant portion of planet-warming sunlight back into space. As ocean water does the exact opposite, losing arctic ice can have a self-reinforcing effect.

As well as absorbing sunlight, the world's oceans also suck up carbon dioxide. With CO2 levels rising in the atmosphere, oceans are taking on ever-greater amounts and becoming more acidic in the process.

Rising temperatures and rising acidity pose a dual threat to marine organisms that are unaccustomed to the abrupt changes taking place in their habitat. Sensitive creatures like plankton and corals are among the most critically threatened.

This is already well known, but the idea of the Greenpeace expedition is to simulate Arctic conditions as true to nature as possible.

"The idea is to have an experiment in situ," said Ulf Riebesell, head of acidification research at the University of Kiel.

Riebesell will be joining the international team of scientists off the Norwegian Arctic island of Spitsbergen in five weeks time for what he says is one of the first attempts to project the impact of rising CO2 levels on-site in a region that is "particularly sensitive to acidification."

Tubes called mesocosms, taller than a double-decker bus, will be lowered 17 meters into the ocean. 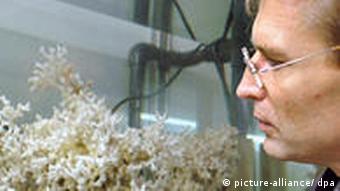 There, nine of these tubes will collect 50,000 litres of water each. The mecocosms will be exposed to different treatments, designed to reflect levels of CO2 and warming over the coming decades, to see how the region might be expected to hold up.

The team of researchers from Germany, the UK, and the US will also examine glacier-melting in Greenland and the effects of industrial fishing in previously inaccessible regions during the four-month expedition.

But the goal is more than just realizing scientific data.

Despite the mounting evidence of climate change, polls suggest that public support for action to tackle the problem has waned in recent months. So Esperanza's mission to the Arctic also hopes to add to pressure on politicians to take urgent action.

The Intergovernmental Panel on Climate Change reports that provide the scientific basis for negotiations to reduce greenhouse gas emissions take years to compile, and often lack the most recent data. Because of this, the reports tend to be conservative in nature and have consistently underestimated the urgency of the problem so far.

New climate related studies almost invariably reveal a problem unfolding faster than we had previously expected, which is why Greenpeace wants to see decision-makers getting the most up to date information available.

"This is the kind of information that we need to have (to get) the full picture on the impacts of global warming," Kaiser said.

It's estimated that global emissions will need to fall by 40% on 1990 levels within the decade if the Arctic is to have any chance of being preserved in the condition it's been in for the past 10,000 years.

Russian scientists have doubts over whether global warming is here to stay and whether it's man made. But for the Saami in Russia's north, the mild winters already pose a threat to their traditional way of life. (29.11.2009)

Two German freighters have successfully travelled from Asia to Europe via the Arctic waters above Russia. As the fabled Northeast Passage comes a step closer to reality, some say it may end up a road seldom traveled. (22.09.2009)