German Finance Minister Wolfgang Schäuble has weighed in on the debate about the European Central Bank’s plans to buy bonds from crisis-ridden countries. The program is a tough sell in Germany. 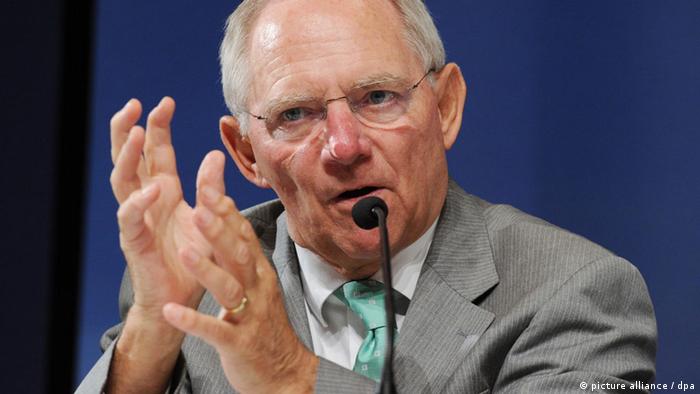 The finance minister used an interview with the mass-circulation Bild am Sonntag newspaper to try to reassure Germans that Chancellor Angela Merkel's government was staying the course on the euro.

Schäuble said the announcement by the European Central Bank (ECB) that it would buy up sovereign debt to bring borrowing costs down for troubled states was not a signal for them to let up in their efforts to bring down their deficits.

"We can only overcome the crisis of confidence in the euro if we continue with our reform efforts," the finance minister said.

"It would be a mistake if the ECB decision was wrongly interpreted to mean that efforts could now be relaxed. Quite the opposite is true," Schäuble said.

The European Central Bank has unveiled a new bond-buying program in yet another attempt to ease the eurozone's debt crisis. DW has spoken with several experts about the latest move's significance. (07.09.2012)

He added that countries in the grip of financial crisis needed not only to "continue to do their homework, to reduce budgetary deficits," but also to work to "increase competitiveness. And we need to move quickly on the necessary institutional reforms in the EU and the eurozone."

Schäuble also rejected the suggestion that with this renewed bond-buying plan, ECB President Mario Draghi and the bank could be overstepping their brief.

"The ECB has always abided by its mandate in the past, and I assume that it will continue to do so in the future," Schäuble said.

However, he also warned that “monetary policy may not be used for state financing. This threshold must not be breached.”

"The ECB made clear yesterday… that the future of the euro will to a large extent be determined by political action and that the conditionality is a very important aspect," Merkel said following a meeting with Austrian Chancellor Werner Faymann in Vienna on Friday.

"Responsibility and checks, or help and checks and conditions, always go hand in hand," she said.

Despite such words of support, the bond-buying program is a tough sell in Germany.

German central bank president Jens Weidmann, who sits on the ECB's governing council, cast the sole vote against the plan, describing it as "tantamount to financing governments by printing banknotes."

A number of lawmakers from within Merkel's center-right coalition have even called for the program to be challenged in Europe's top court.