An end looks to be in sight to the "Scallop Wars" after talks between government and industry representatives from the UK and France. The feud saw British and French fishing vessels embroiled in bitter offshore battles. 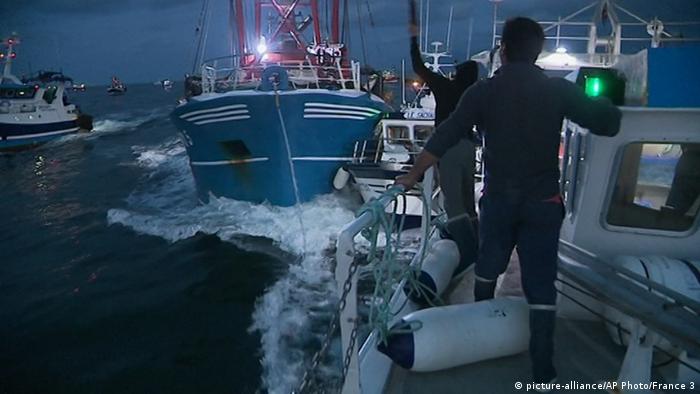 French and British boats clash, with the larger boat here ramming the smaller one

British and French fishermen on Wednesday agreed on the principles of a deal that would end the so-called Scallop Wars.

"The UK and French fishing industries and governments held constructive talks today about scallop fishing in the eastern Channel including Baie de Seine," the governments of both countries said in a joint statement.

Tensions were at their worst last week, when five British vessels were involved in a confrontation with about 35 French boats in international waters off the coast of Normandy.

Fishermen from both sides of the Channel were reported to have thrown projectiles, including smoke bombs, rammed vessels, and hurled insults at each other.

French fishermen were outraged that their British counterparts were dredging waters in the Baie de la Seine, while their own government prevented them from doing so.

France bans all scallop dredging between May 15 and October 1, with the aim of allowing stocks to replenish, but — for smaller vessels under 15 meters — Britain allows it all year round.

The new agreement would mean that vessels under 15 meters would also be included in the ban, with a compensation package to be agreed for those operating smaller scallop boats.

A voluntary deal for all British boats to respect the French closure was agreed until the deal is officially signed.

Earlier this week, the French government had said its navy was ready to intervene in the feud, if necessary.

Scallops — which are known as coquilles Saint-Jacques in France — are one of only a few species whose catch is governed by national regulations rather than European Union ones.

Read more: Will the Brexit save UK's fishing industry?

The feud flared up five years ago, but yearly agreements were made that saw the British limit dredging in exchange for French scallop permits.

The latest flare-up comes as Britain prepares to leave the EU in March next year, after which time UK fishermen could lose access to EU waters such as the Baie de la Seine.

Britain says it will withdraw from a 50-year-old deal allowing some other countries to fish near its coast. Pulling out of the deal, which will take two years, fulfills a key Brexit pledge. (02.07.2017)