Saving lives at sea: how the ″Astral″ rescued hundreds in one day | Europe| News and current affairs from around the continent | DW | 30.08.2016

Saving lives at sea: how the "Astral" rescued hundreds in one day

A Spanish activist recounts the rescue of migrants from their perilous journey across the Mediterranean Sea on Monday - one of the largest influxes of refugees in a single day so far this year. 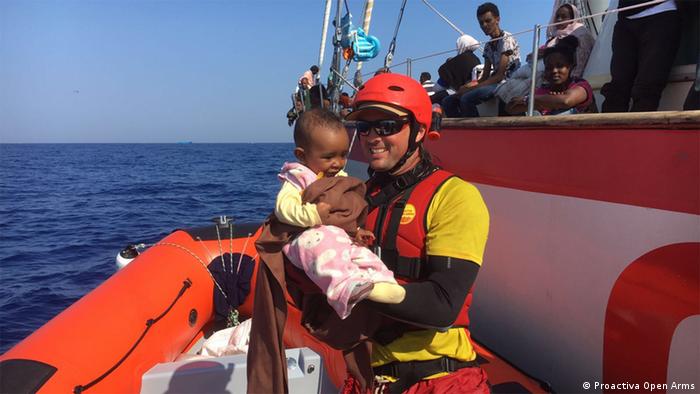 Their mission is simple, their rationale concise: "We are lifeguards and we are saving lives." Started in September 2015, the small Barcelona-based NGO Proactiva Open Arms initially helped refugees "disembark safely" onto the island of Lesbos, Greece. This year, the organization, which depends entirely on donations, has expanded its humanitarian operation to patrolling the coast off Libya.

The Mediterranean Sea has become "the greatest path to Europe" - and the "most dangerous", the group warns on its website, arguing that the refugees' journey across the ocean with its risk of drowning is one of the hardest parts of the trip. DW spoke to Gerard Canals, 34, a Spanish lifeguard who was been with Proactiva Open Arms from day one, and works for the NGO full-time.

DW: Some 6,500 migrants were saved off the Libyan coast in many separate rescue missions on Monday, including by Proactiva Open Arms. Mr. Canals - you were there, could you describe what you saw?

Gerard Canals: The operation started very early in the morning, before sunrise at about 5:30 a.m., with a call from MSCC (Maritime Rescue Coordination Center) in Rome. After about half an hour we saw a big wooden boat and rescued more than 700 people, many babies - two of them newborn, just 5 days old. That boat was full of people.

Our boat, the "Astral", is not very big, but in this case, we took in 200 people, mostly families with smaller children. We gave the others life jackets to secure them, so if the boat capsizes, everyone is safe even in the water. On Monday, it was an unusually large group of people, and the rescue took a long time. It was 10 p.m. by the time we had transferred everyone to other vessels - we send a message to a bigger vessel for the rest of the people in the boat. All day long, we were surrounded by boats and people.

How do the people on the boat react when they see the "Astral" heading their way?

Usually, they are happy, but they are also nervous when they see that they are not the first to be rescued. But when they realize that everybody will be rescued, they're okay. But even if they're calm, in this kind of boat it's very, very dangerous because they can capsize easily with just a little movement of the waves over the boat. These wooden boats are really the most dangerous.

Other groups were involved in Monday's rescue operation- is there any cooperation with them, with other NGOs?

Actually, there were not many NGOs here on Monday, most of them are improving the security situation in the port of Valetta, Malta. The other rescuers were from warships and the coast guard.

How does Proactiva Open Arms operate?

We usually navigate on a stretch along the Libyan coast, about 20 miles from the shore, and usually we get a call from the MSCC, or the warships, or we find them by ourselves. After we've secured them, we wait for further instructions from the MSC Rome, which is in charge of coordinating the rescues. The "Astral" has a crew of 11, and we have another operation in Greece.

Italy's coastguard: 6,500 migrants rescued off Libyan coast in one day

The central Mediterranean route has witnessed a surge in migrants since the so-called Balkan route was closed. More than 3,000 migrants have died this year attempting the perilous journey. (29.08.2016)

The German Red Cross expects around 3,000 calls for help by the end of 2016 from refugees who have lost track of family members on their perilous journey. A large number of requests come from minors. (25.08.2016)

Libya's internationally recognized parliament has voted no confidence in the fragile UN-backed unity government. The political chaos that has beset Libya since the 2011 overthrow of Moammar Gadhafi looks set to continue. (22.08.2016)