Riyadh and its allies have lamented the "negative" response to their demands from Qatar. The four Arab nations who cut off ties with Qatar met in Cairo on Wednesday. 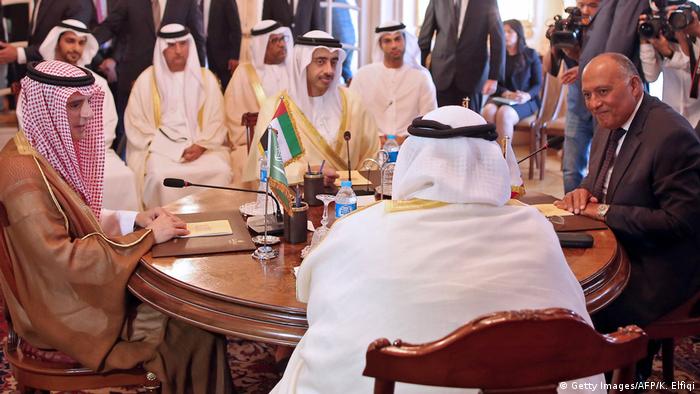 The foreign ministers of four Arab nations gathered in Cairo on Wednesday to discuss Qatar's response to a joint list of demands for ending the diplomatic crisis in the Persian Gulf. Saudi Arabia, Egypt, the United Arab Emirates and Bahrain have been seeking to isolate their tiny neighbor over allegations that it supports extremist organizations.

The bloc said that they "regret the negative response from Qatar," in a statement read by Egyptian Foreign Minister Sameh Shoukry. He added that Qatar exhibited a "failure to realize the gravity of the situation."

Shoukry's Saudi counterpart Adel al-Jubeir then confirmed that "the political and economic boycott will continue until Qatar changes its policies for the better."

Saudi Arabia had said earlier on Wednesday that it and its Arab allies had received Qatar's response to their demands within the set deadline.

While there was no further elaboration on the content of Qatar's answer, Doha top diplomat Sheikh Mohammed bin Abdulrahman Al-Thani had described the list of demands for restoring relations as "unrealistic" and "not actionable." He further threatened to pull his country's membership from the Gulf Cooperation Council (GCC).

According to the White House, US President Donald Trump had spoken with Egyptian President Abdel Fattah el-Sisi on the phone about the crisis, urging the Middle Eastern leaders to use diplomacy to resolve the dispute. Trump also reportedly offered his support in the fight against terrorism.

The quartet of Arab nations later put forward a list of 13 demands, which include dropping its support for the Muslim Brotherhood, closing down its broadcaster Al-Jazeera, downgrading diplomatic ties with Iran and shutting down a Turkish military base.

The isolated emirate was given an extra 48 hours to meet the demands after an initial 10-day deadline passed on Sunday.

The four nations have closed all air, sea and ground links to Qatar, cutting off all imports including food. Qatari citizens were also ordered to leave the four countries.

The state of affairs in the Gulf

Despite the seriousness of sanctions, Qatar's Sheikh Mohammed bin Abdulrahman Al Thani said that Doha was looking for a solution to the crisis based on dialogue.

"The state of Qatar has adopted a very constructive attitude since the beginning of the crisis," he said. "We are trying to act mature and discuss the matter."

The blockade on Qatar has also raised serious questions over the region's stability. The Gulf is home to the world's largest energy exporters, as well as a number of western military bases.

US President Donald Trump initially expressed  his support for the Qatar blockade, tweeting "During my recent trip to the Middle East I stated that there can no longer be funding of Radical Ideology. Leaders pointed to Qatar - look!"

Trump's response, however, was markedly different to that of the US State Department, which has been acting as more of a mediator in the crisis, alongside Kuwait.

Recently, however, Trump has underscored the importance of unity for the region's stability.

The US also has 10,000 troops in Qatar, the site of its main military base in the Middle East.