The Saudi monarch's rare month-long trip takes him to strategically important nations in the economically fast-growing region, with which Riyadh wants to deepen commercial engagement and socio-political ties. 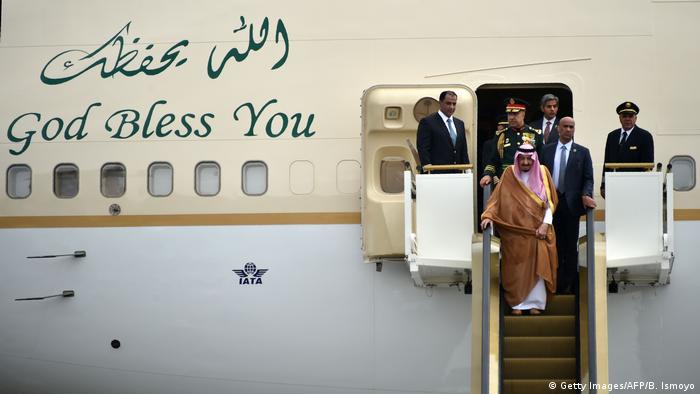 Saudi King Salman and his vast entourage comprised of over 1,000 people, including princes and ministers, were welcomed Wednesday to the Indonesian capital by the country's President Joko Widodo and Jakarta Governor Basuki Tjahaja Purnama.

Jubilant crowds of flag-waving schoolchildren lined the route as a heavily secured convoy of vehicles carried the king and his retinue to a presidential palace in the nearby city of Bogor.

The first visit of a Saudi monarch to Indonesia, the world's most populous Muslim nation, in nearly a half-century has received widespread media coverage.

Almost 460 tons of equipment has been flown in for the Indonesian trip, including Mercedes limousines and electric lifts.

Salman's Indonesia visit is part of his month-long six-nation Asian tour with stops in Malaysia, Indonesia, Brunei, Japan, China and the Maldives.

The trip comes at a time when Riyadh is actively scouring for investment opportunities and ways to diversify its oil-dependent economy. 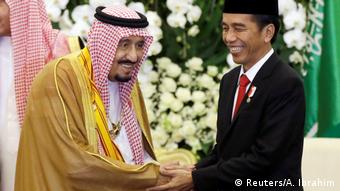 "The primary focus of the visit is economic," says Elina Noor, director of the Institute of Strategic and International Studies Malaysia (ISIS), a Kuala Lumpur-based think tank.

For the Southeast Asian portion of the king's trip, the expert told DW, the main objective is to improve bilateral trade and investment ties between Saudi Arabia and the region's Muslim-majority states.

"This is to the benefit of both sides given Saudi Arabia's pressing need to diversify its economy and Southeast Asian governments' continual desire to boost investment in their respective countries."

Indeed on Wednesday, Indonesia and Saudi Arabia signed an array of agreements in areas ranging from trade to aviation. Furthermore, Riyadh pledged $1 billion in development finance for Jakarta.

Indonesian foreign minister: 'Trying to create a culture of tolerance'

Concerns abound in recent times about the threats posed by radicalization and terrorism to Indonesian society. The country's foreign minister spoke to DW about how the government is tackling these issues. (20.02.2017)

Following the Jakarta attacks, Malaysia has raised the alert status to the highest level, with police heightening security measures at several key locations. But just how high is the terror threat? (21.01.2016)

A senior parliamentarian known for alleging government corruption has been jailed for 18 months. Rights groups said the conviction sends a "dangerous chill on free speech," and may lead to political repression. (14.11.2016)

Salman's visit to the Southeast Asian countries also underscores cooperative and mutually reinforcing ties between Muslim-majority countries and affirms the Islamic credentials as well as image of the governments of Malaysia and Indonesia, underlines Noor.

"For Malaysia and Indonesia, in particular, this comes at a politically opportune time given domestic and international developments."

This view was echoed by Saleena Saleem, a researcher at the S. Rajaratnam School of International Studies (RSIS) in Singapore.

"The king's visit and the signing of the investment agreement reflect well on Malaysia's political leader, Najib Razak, who faces damaging allegations of corruption and financial mismanagement over state investment fund, 1MDB."

"The Aramco-Petronas agreement is one way in which Riyadh shows support for the Southeast Asian leaders," she told DW.

Secondly, the leaders of these countries view the visit positively due to the political points they can score from it with their electorates.

There is a tendency among the masses and the elites in Southeast Asia to positively view Saudi Arabia as the Islamic center of gravity, political analyst Noor underlined, stressing that this is further reinforced by reference to the Saudi king as the "Custodian of the Two Holy Mosques" in official documents and releases.

This is partly the reason why contentious issues such as religious extremism associated with Saudi Arabia are downplayed, say observers. "These concerns are not shared in the same way at all as in the United States or Europe and certainly would not get public and official airing in the region," Noor noted.

"In any case, religious conservatism in countries like Malaysia and Indonesia has arguably been fueled more by domestic political trends than it has been by external factors, if not a complex mix of the two." 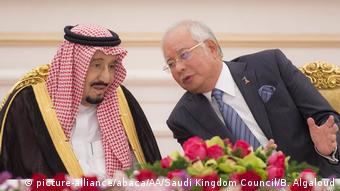 Explaining the issue of Saudi-funded religious schools contributing to growing radicalization in these societies, RSIS researcher Saleem stated that the trend actually began in the 1980s.

The generation of Southeast Asian religious scholars who were trained during that period in Saudi schools, or in Saudi-funded schools, are still preaching today across the region, she said.

"It is important to recognize that the religious training (with emphasis on jihad, for example) then was utilized for political purposes - such as recruiting people to fight and defeat Russia in Afghanistan.

"But in today's context, the same kinds of teaching actually threaten the position of Saudi leaders. This has been apparent for some time already since the 1990s."

That's why the expert says Saudi Arabia has already implemented new approaches, with an emphasis on rejecting the extremist thought advocated by groups such as al-Qaeda and the so-called Islamic State.

However, these are newer measures and the results are unlikely to be immediately apparent. "In the meantime, Southeast Asian countries need to be more pro-active in monitoring the kinds of Islamic education that is being taught in their schools," Saleem said.