Riyadh has sworn to seek out the roots of terrorism in Saudi Arabia and destroy them. The king's comments come after a deadly assault on a minority-Shiite mosque. 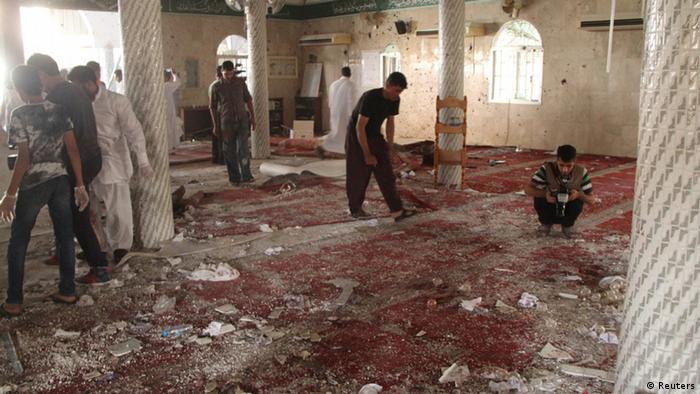 Saudi Arabia's King Salman promised on Sunday to punish those responsible for the recent suicide attack at a Shiite mosque in the country's east - a rare occurrence in the kingdom. Salman decried the "heinous terrorist attack" the runs counter to Islamic and human values.

Just hours after the Saudi government confirmed that the assault in the Qatif region on Friday was the work of an "Islamic State" (IS) fighter, King Salman made a statement directed to Crown Prince Mohammed bin Nayef, who is also minister of the interior, saying that "every participant, planner, supporter, collaborator or sympathizer with this heinous crime will be held accountable, tried and punished."

"Our efforts will never stop ... fighting the deviant thought, confronting the terrorists and wiping out their hotbeds," the statement read.

The interior ministry identified the bomber as Saleh bin Abdulrahman al-Qashaami, a Saudi national, in a press release late Saturday. He was on the wanted list as an active member of an IS-loyal terrorist cell.

The attack was the deadliest attack on Saudi territory since a 2004 al Qaeda attack on a housing complex occupied by foreign workers. 21 died in the bombing targeting the kingdom's Shiite minority, who IS and some Saudi hardliners consider heretics.

"The government should protect people"

This was one of the first IS-related incidents in Saudi Arabia, as the group is primarily active in Iraq and Syria. After claiming responsibility for the attack, IS warned that more "black days" would follow for the nation's Shiites.

The kingdom's interior ministry also confirmed that IS militants were responsible for the death of a police officer in Riyadh earlier in May. Pvt. Majed Ayedh al-Ghamdi was attacked by a group of 5 IS supporters, who shot him and burned his body.

Residents of Qatif region took to the streets on Saturday to denounce the attack. One woman told French news agency AFP that the fault lay in Riyadh, saying "the government should protect people and if it's not, this is the government's fault."