Houthi militants from Yemen have killed three Saudi border guards in the province of Najran, according to the Saudi Defense Ministry. At least 500 rebels have been killed in clashes along the border, officials claim. 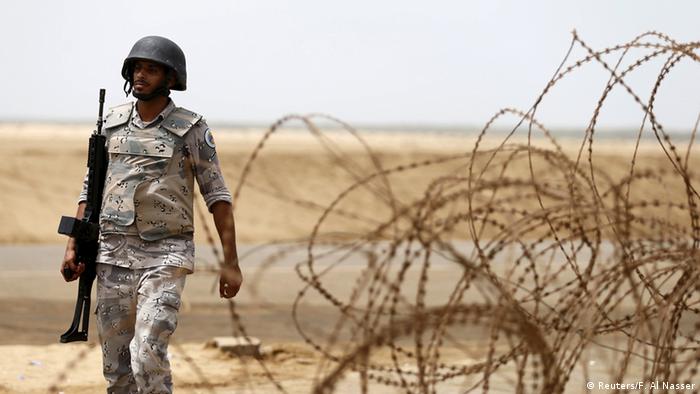 A mortar shell fired by Shiite Houthi rebels in Saudi territory killed three officers and wounded two others in a border observation post on Friday, according to the kingdom's Defense Ministry. The mortar attack brings the total number of casualties for Saudi troops in the Yemen conflict to six.

The Defense Ministry said Saturday that 500 Houthi rebels have been killed in clashes along the Yemen border since late March. Officials did not say how they reached that figure.

Saudi Arabia is leading a military coalition which has conducted airstrikes on Houthi positions in the neighboring country. The object of the air campaign, according to Saudi officials, is to reinstate internationally-recognized President Abed Rabbo Mansour Hadi to power.

Hadi was forced out of the capital, Sanaa, by Houthi rebels earlier this year, and subsequently fled to Saudi Arabia in March.

Yemen, although the poorest country in the Arab world, holds a key strategic position in relation to shipping routes. It has been torn apart by fighting between Hadi loyalists and rebels, as well as powerful local group of al Qaeda militants.

He said the raids had neutralized the air and ballistic capabilities of the Houthi rebels and their allies, and "will continue."

"At the appropriate time, we will take action on the ground," he added.

UN calls for a break in fighting

The Saudi-led coalition is holding Yemen's ports and airspace under strict control, in order to prevent the Houthi rebels and their allies, supporters of former autocrat Ali Abdullah Saleh - from acquiring more weapons.

Despite heavy fighting and continuous airstrikes, the Red Cross managed to deliver a second planeload of aid to Sanaa on Saturday.

The United Nations has warned of an unfolding humanitarian crisis in the country, and appealed for an immediate pause in the fighting to enable activists to deliver aid.

Some observers fear that growing conflict in Yemen might turn into a proxy war between Saudi Arabia and Iran, which are both attempting to expand their influence in the Gulf region.

Saudi Arabia has accused Iran of supporting and arming the Houthi rebels, a charge that Teheran denies. In turn, Teheran has denounced the airstrikes against the Houthis, accusing the Saudis of "genocide" in Yemen.